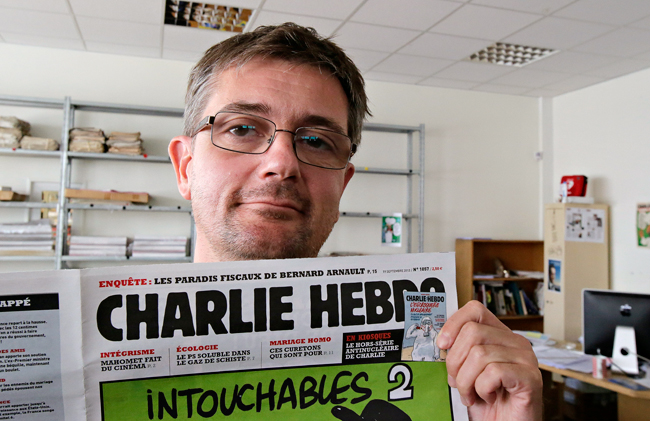 PARIS — France stepped up security Wednesday at its embassies across the Muslim world after a French satirical weekly revived a formula that it has already used to capture attention: publishing crude, lewd caricatures of Islam’s Prophet Muhammad.

Wednesday’s issue of the provocative satirical weekly Charlie Hebdo, whose offices were firebombed last year, raised concerns that France could face violent protests like the ones targeting the United States over an amateur video produced in California that have left at least 30 people dead.

The drawings, some of which depicted Muhammad naked and in demeaning or pornographic poses, were met with a swift rebuke by the French government, which warned the magazine could be inflaming tensions, even as it reiterated France’s free speech protections.

Anger over the film “Innocence of Muslims” has sparked violent protests from Asia to Africa, and in the Lebanese port city of Tyre, tens of thousands of people marched in the streets Wednesday, chanting “Oh America, you are God’s enemy!”

Worried France might be targeted, the government ordered its embassies, cultural centers, schools and other official sites to close on Friday — the Muslim holy day — in 20 countries. It also immediately shut down its embassy and the French school in Tunisia, the site of deadly protests at the U.S. Embassy last week.

The controversy could prove tricky for France, which has struggled to integrate its Muslim population, Western Europe’s largest. Many Muslims believe the Prophet Muhammad should not be depicted at all — even in a flattering way — because it might encourage idolatry.

Violence provoked by the video, which portrays the prophet as a fraud, womanizer and child molester, has left at least 30 people dead in seven countries. It began with a Sept. 11 attack on the U.S. Embassy in Cairo, then quickly spread to Libya, where an attack on the U.S. Consulate in Benghazi left the U.S. ambassador and three other Americans dead.

A lawsuit was filed against Charlie Hebdo hours after the issue hit newsstands, the Paris prosecutor’s office said, though it would not say who filed it. The magazine also said its website had been hacked.

Chief editor Stephane Charbonnier, who publishes under the pen name “Charb” and has been under police protection for a year, defended the Muhammad cartoons.

“Muhammad isn’t sacred to me,” he told The Associated Press. “I don’t blame Muslims for not laughing at our drawings. I live under French law. I don’t live under Quranic law.”

He said he had no regrets and felt no responsibility for any violence.

“I’m not the one going into the streets with stones and Kalashnikovs,” he said. “We’ve had 1,000 issues and only three problems, all after front pages about radical Islam.”

A small-circulation weekly, Charlie Hebdo often draws attention for ridiculing sensitivity around the Prophet Muhammad. It was acquitted in 2008 by a Paris appeals court of “publicly abusing a group of people because of their religion” following a complaint by Muslim associations.