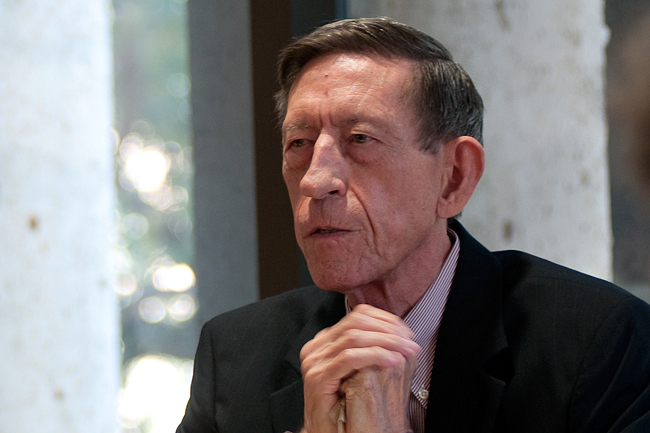 Federal Judge Harry Hudspeth speaks about the laws affecting the gun export industry from the U.S. into Mexico at the Harry Ransom Center Wednesday. Hudspeth was one of three at UT who addressed border issues such as immigration, violence and drug-trafficking.

An Iraq war veteran and UT student said he decided to research political violence along the U.S.-Mexico border after visiting his grandparents in a border town and seeing a grenade launcher in place to fortify their local pharmacy.

Meyer, a Texan who served in Iraq and Afghanistan, spoke Wednesday at a panel on drug trafficking, immigration and violence along the Rio Grande. Alongside Meyer were Federal Judge Harry Hudspeth from El Paso and journalist Dave Harmon, who has written about immigration policies for the Austin American-Statesman. The panel, held at the Harry Ransom Center on Wednesday, was the first in a series hosted by Rethinking Diplomacy, an organization new to UT this semester that aims to bring diplomacy considerations to the forefront of many areas of study, member Andrew Straw said. Straw, history graduate student, organized the panel.

“This is the first event we’ve ever had,” Straw said, “So we wanted to start with something very close to home in Texas.”

“[Americans] are the market,” Harmon said. “Drug trade wouldn’t exist if we didn’t like drugs so much and if we didn’t make them illegal.”

Harmon said many South and Central American governments are considering decriminalization as an option for decreasing violence, something America is not willing to do at this point. He said President Barack Obama dodged the issue at the Latin American Summit in April.

“The tide is turning politically in Mexico and South and Central America towards decriminalizing drugs,” Harmon said. “They’re starting to say, ‘we’ve lost this war, let’s admit it.’”

Meyer said the U.S. crackdown on methamphetamine labs pushed production to the south, and a strengthening against air and sea trafficking concentrated the conflict at the border. Combined with the political climate in Mexico, this created the “perfect storm” for drug-related border violence, he said.

“All human beings have an obligation to understand our own behavior,” Meyer said. “I was involved in a lot of political violence in Afghanistan and Iraq and I think I need to understand that.”