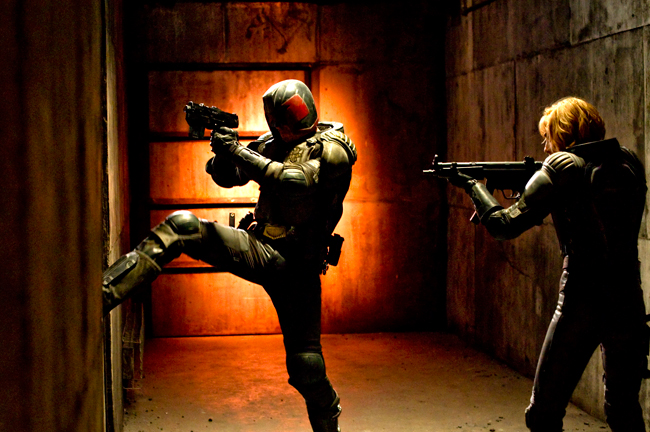 “Dredd 3D” is a film of simple pleasures. Blood, guts and bodies stacked as high as the 200-story ghetto where the majority of the film takes place are prevalent and make for an entertaining, recklessly goofy experience.

The film takes place in your typical futuristic wasteland. The remnants of humanity occupy massive skyscrapers in a city policed by the Judges, who conveniently function as both jury and executioner. Dredd (Karl Urban) is one of these helmeted law enforcers, and he’s asked to take rookie Anderson (Olivia Thirlby) out on a test run one day. Her first case sends them to one of those towering apartment buildings, where they land in the crosshairs of crime lord MaMa (Lena Headey), who locks down the building after the Judges arrest one of her key enforcers (Wood Harris).

The premise of the film sounds remarkably similar to this year’s “The Raid: Redemption,” but the production dates for both films prove that it’s a happy accident that audiences are simply lucky enough to get two takes on the same potboiler set-up.

What “Dredd” lacks in originality, it makes up for in bloodshed.

The film kicks off with a kinetic opening car chase that results in Dredd shooting a fireball into a criminal’s mouth — and it only gets more ridiculous from there. The violence in “Dredd” is relentless, and the film never stops coming up with new and creative ways to spray blood at the audience in three dimensions.

Throughout the film, Urban never removes his Judge’s helmet, and given that he only has the lower half of his face to emote with, he does an admirable job. Dredd lives in a world of black and white, good and bad, and Urban’s portrayal of the unstoppable force of order is quite entertaining. Urban delivers even the cheesiest dialogue (of which there’s plenty) with gravelly aplomb and plays Dredd with a conviction and unquenchable thirst for justice,

Thirlby plays the soft counterpoint to Dredd, someone who can still see the good in people, and she has just the right amount of naïve enthusiasm for the role. Thirlby is a stranger to the world of action cinema, but she handles herself well throughout By the finale, she’s almost a bonafide badass. Lena Headey is most recognizable for playing queens in both “300” and “Game of Thrones,” but in “Dredd” she’s playing a different twist on a similar character. MaMa bears brutal facial scars, and Headey seems to have a blast with the grotesquerie, only smiling when there’s green gunk on her teeth to show off. She makes for an authoritative, intimidating ruler and an effective villain.

MaMa is also a manufacturer of a popular new drug called Slo-Mo, and “Dredd” gets a lot of mileage out of the scenes where users toke up and their worlds slow down to a fraction of normal speed. Director Peter Travis makes the world of “Dredd” as ugly as possible, full of dirt and grime and danger, but Slo-Mo fills the screen with elegant colors and beautiful imagery. It’s a striking contrast, an interesting approach to a subject that most films turn into an after-school special, and it gives “Dredd’s” 3D visuals a chance to stretch their legs.

“Dredd 3D” may not be especially memorable or original, but its all-or-nothing approach to Dredd’s philosophy and his brutal treatment of his enemies keep things from ever becoming boring. For viewers who don’t mind a massive heap of cheese with their genre chaos, there’s plenty to enjoy in “Dredd.”