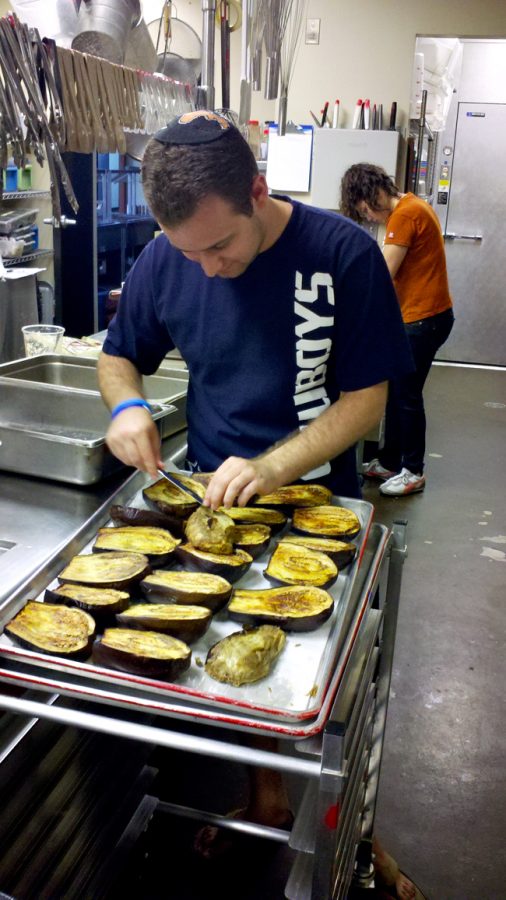 Hebrew language and literature junior Aaron Liener prepares food in the Texas Hillel kitchen, where members of the Jewish organization will prepare for the Kol Nidre dinner. The dinner will be held Tuesday night before the Yom Kippur fast period begins. (Image courtsey of Texas Hillel)

Jewish students and administrators on campus will begin a traditional Yom Kippur fast Tuesday night, but before that happens, a few will spend hours thinking about and preparing food.

Yom Kippur is considered the holiest day of the Jewish calendar and although the occasion features a 25-hour fast, UT Jewish organizations bookend the day with two meals. Both the Rohr Chabad Jewish Student Center and Texas Hillel will hold an early dinner on Kol Nidre, the Tuesday night before the fast period begins, and each organization will host a break-fast dinner the following night. The two organizations provide weekly Shabbat services and dinners, host community events and plan programming for all Jewish holidays.

At Chabad, Co-Director Ariela Johnson takes responsibility for the bulk of the food preparation. To prepare for a Shabbat dinner Friday night during a typical week, Johnson plans the menu Wednesday, shops for ingredients Thursday and cooks Friday, all while dealing with her responsibilities as a mother to four children all under 6. The promise of a homemade meal, and one that adheres to Jewish dietary standards, means Chabad and Hillel must put significant planning into each meal. Johnson said Shabbat dinners take roughly five to seven hours to prepare.

Although it is hard to know exactly how many students to expect at any given event, Johnson said she usually serves between 80 and 100 people.

“I typically take whatever number of kids RSVP on Facebook and add about 20 to it,” Johnson said.

For this year’s Kol Nidre dinner, Johnson said she expects a crowd of between 100 and 150 people, but she anticipates only around 40 students will attend the break-fast.

Margo Sack, Hilel’s Director of Jewish Student Life, said that years of experience guide the Hillel kitchen in determining how much food to make.

“We expect there will be significantly fewer attendees during, say, OU weekend,” Sack said.

Sack said Hillel expects a larger group for Yom Kippur this year because students are less likely to go home during the week.

Rabbi David Komerofsky, Executive Director of the Texas Hillel Foundation, said until this year, student volunteers were entirely responsible for Hillel’s Shabbat dinners. The two students who led the efforts, Zachary Spigel and Brian Milman, however, have since matriculated to medical school. Today, Elida Vasquez is the kitchen supervisor and students still set up the dining hall and assist with serving.

One of those students helping is Hebrew language and literature junior Aaron Liener, a member of Hillel’s executive cabinet. He said that as a Jewish student on campus, Hillel was the first place he went to find community.

“It’s second nature,” Liener said. “It’s the first thing you do in an unfamiliar situation.”

“Hillel is my Austin Jewish family,” he said. “We come together to share a Friday night meal just like we would at home.”

Komerofsky said it is ironic there is so much talk of food preparation during a fasting holiday, but anything that brings the community together is a positive thing.

“We spend so much time worrying about the fast that we think about food more than we otherwise would,”

Komerofsky said. “But once we take care of that, we can focus our energies on becoming better people.”

Johnson echoed that sentiment and said, “Ultimately, food is not the essence of the day.”