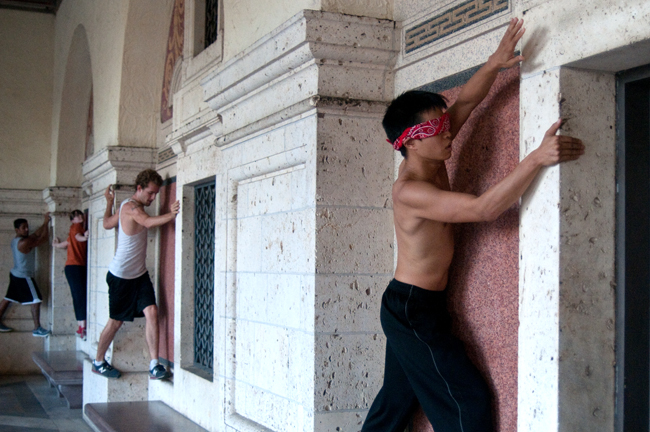 Patrick Yang leads parkour participants during a training session on campus Saturday evening. Parkour involves overcoming obstacles by moving from one point to another as quickly and efficiently as possible.

While the parkour phenomenon has faded through the years, some parkour enthusiasts in Austin are keeping the trend alive. Although American popular culture has glamorized parkour as an extravagant, “I-only-jump-from-the-tallest-exploding-buildings” lifestyle, the discipline’s philosophical backbone is what true parkour trainers enjoy.

“Parkour training requires one to go through a process of confronting and overcoming fear to perform new actions with new obstacles,” computer science senior Aidan Coyne said. Coyne serves as one of the leaders of UT’s Parkour Austin organization, formed in 2008.

The concept of parkour has been around for more than 100 years. French stunt coordinator David Belle coined the term “parkour” in 1988, and the practice has been referred to as such ever since. Inspired by his training and the teachings from his father, Raymond Belle, David Belle popularized parkour in the 1990s. The discipline’s popularity would help it grow to become a worldwide sensation.

“There’s something beautiful about the discipline,” Patrick Yang, UT graduate and Parkour Austin member, said. “When you’re out there on the pavement, there aren’t other players like in basketball or added mechanical factors like in skateboarding. There is only you, your skill and your judgment.”

Yang began parkour training in 2007 and has since become a devoted practitioner. He’s even worked with Austin parkour professional Matthew Willis, who has practiced parkour for more than 10 years.

Under the tutelage of first-generation parkour athletes (commonly known as Yamakasi,) Willis went on to create several parkour organizations that are still around today: Texas Parkour, Texas Parkour Academy and Parkour Federation.

“I want to help those who truly want to understand the philosophy behind parkour,” Willis said. “Having learned from the Yamakasi, I would like to share my knowledge with anyone interested.”

Such knowledge is important considering the misconceptions surrounding parkour. In ignoring parkour’s philosophy on overcoming fear, pop culture has shaped the practice into a spectacle.

“By and large, we do not scale buildings or jump off of tall structures,” Yang said. “That image is to parkour what Jackie Chan is to kung fu: highly stylized for your entertainment but not very realistic.”

“I do not fear [what parkour has become in the mainstream,] but I don’t embrace it, either,” Willis said.

This issue with parkour is an ongoing discussion, but some parkour practitioners have made a career out of their training. Marcus Lincoln is one them. He’s a sponsored athlete in Austin with American Parkour and coaches gymnastics at Crenshaw Athletic Club. However, Lincoln’s devotion to parkour is much more than a paycheck: it’s a lifestyle.

“My life revolves around parkour,” Lincoln said. “Parkour is not a practice that can easily be forgotten. After a certain point of investment, the amount of alteration to your perspective of the world around you is changed significantly.”

Like other parkour advocates, Lincoln enjoys the self-awareness that comes with the discipline.

“Through parkour practitioners are able to better understand themselves, the environment around them and the relationships between them,” he said.

This desire to be more in tune with themselves is what keeps most parkour participants coming back for more.

“More than adrenaline, more than the thrills, this is what’s addictive: the mastery over my own body,” Yang said. “Obstacles in my life seem less daunting, more trivial, when I have the mindset that I can improve them and then come back later to conquer them.”

If there is anything to take from parkour, it is this: be fearless, climb your walls as best as you can (be it figurative or literal) and most importantly, land safely.