Crimes rates higher in East Riverside than in West Campus 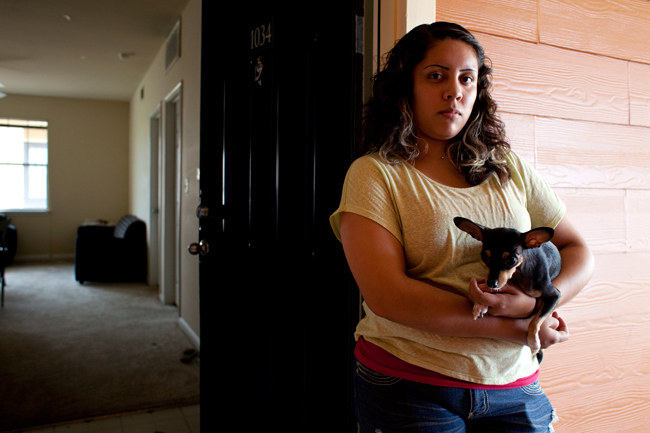 Editor’s Note: This is the third in a three-part series of stories examining the demographics of two neighborhoods where students live — West Campus and East Riverside. Click for part one and part two.

According to data from Austin Police Department crime analysts and the APD Crime Viewer database, the East Riverside community sees more incidents of most types of crime than the West Campus area, especially violent crime.

“I always hear the ringing of the police car in Riverside,” mechanical engineering junior Yu Huang said. “Sometimes it is pretty scary.”

Most students who live in East Riverside live in an area of about .84 square miles. From Aug. 1, 2011 to Aug. 1, 2012, residents in that area reported 87 violent crimes, according to the APD Crime Viewer. Violent crimes include murder, aggravated assault, rape and robbery.

In comparison, the .79-square-mile area in West Campus where most students live experienced only 26 crimes classified as violent during the same time frame, according to the APD Crime Viewer.

“Property crimes tend to be the most common criminal activity for students in this area because of leaving cars unlocked, leaving valuables out in the open even if the car is locked or even leaving their apartment doors unlocked so that anyone can come in and take something,” Vanladingham said.

A locked door did not deter the burglars who forced their way into the apartment of biology sophomore Mariela Vallejo at 1 a.m. Aug. 31.

“I realized somebody was trying to break in,” Vallejo, who lives at The Ballpark, said. “So I called 911. Not long after, [the burglars] broke the door open. Then I saw they were trying to get to my door, and because I didn’t want to be messed with I yelled out, ‘I called 911!’ and whoever it was ran out. I stayed in my room until the cops came, and when they did get here they found [the burglars] had stolen my roommate’s laptop.”

Police have not found the burglars. Vallejo, who has lived in the neighborhood for two years, said she still feels safe there.

“This kind of stuff really doesn’t happen much over here,” Vallejo said.

Vanladingham pointed to the mixed use of the area as the predominant challenge of adequately addressing crime. The area boasts student housing, access to downtown, proximity to schools, newer condominiums, Section 8 low income housing and proximity to outdoor recreation spaces like the Ann and Roy Butler Hike and Bike Trail.

“This area is made up of every type of Austinite possible,” Vanladingham said.

The West Campus population is 50-95 percent students, according to census and city demographic data. East Riverside has a student population spread out among multi-family housing units that comprises half of the population in some areas and as little as 10 percent in other parts of the neighborhood.

Although each neighborhood has its own demographic and criminal patterns, officials for both West Campus and East Riverside stressed auto burglaries as a primary concern for students.

“The majority of crimes we see are crimes of opportunity, such as auto burglaries,” Gary Griffin, an APD district representative for the West Campus area, said.

“There’s more money in this neighborhood than a lot of places, so I am worried about getting broken into or having stuff stolen,” Eberle said. “I’m more worried about property crime than personal injury.”

Eberle reported a theft to APD Aug. 31, just hours after Vallejo reported her apartment burglary in East Riverside. Eberle said he was expecting a package full of medication to treat his Type 1 diabetes. When the medication never arrived, Eberle was suspicious. Two days later someone found the package’s remnants on the street and turned them into police.

“It had been ripped open, and we found that whoever was responsible had stolen almost $1,000 worth of medication,” Eberle said.

Despite the theft, Eberle said he feels safe from violent crime in West Campus.

“I don’t think that’s going to happen much, even at night,” Eberle said. “As long as there’s at least one other person on the block, I feel safe from attack. Me, in particular, I’m a big guy, so I don’t feel like I have to worry.”

Ladonna Matchett, theatre and dance sophomore and East Riverside resident, said she hears her female friends talk about feeling unsafe in West Campus. She said she feels safer in Riverside. She noted similarities in the atmosphere, such as student drinking and partying. She has never been the victim of a crime.

“I think in both places there is an increased police presence because they are college areas with a lot of student homes,” Matchett said. “In West Campus you have a lot of partying and drinking, and you have the same over in Crossing Place and Riverside, also.”

In the year ending Aug. 1, police gave one citation for possession of alcohol by a person aged 17 to 20 in East Riverside, compared to 18 citations in West Campus.

East Riverside has a much higher concentration of students of color than West Campus, and city data shows that police have searched African Americans and Hispanics during routine stops more than white people.

Census data shows 47 percent of 18 to 24-year-olds in the area are Hispanic and 13 percent are African American. The Office of the Police Monitor issued a report in July 2012 that states during 2011, African Americans stopped by APD throughout the city had a 1 in 8 chance of being searched by police, compared to a 1 in 10 chance for Hispanics, 1 in 28 for Caucasians and 1 in 49 for Asians. Data does not show a disparity in the rate of finding contraband during searches of people of color compared to whites.

However, possible racial profiling does not usually factor into increased rates of violent crimes, said police monitor Margo Frasier, a former Travis County Sheriff. Most violent crimes are reported to police rather than being initiated by a law enforcement search, which limits the influence of racial profiling, Frasier said.

“If you see a higher rate of violent crime in an area, it’s probably because there is just more crime in that area,” Frasier said, not because police are targeting a particular area based on its racial makeup.

She said most complaints of alleged misconduct her office receives come from Central East Austin and the downtown area. The office doesn’t receive a disproportionate number of claims from East Riverside or West Campus, Frasier said.

Whether or not racial profiling is a factor in East Riverside crime, the neighborhood faces more instances of crime than West Campus.

Vanladingham, who spent a lot of time in East Riverside during her years at St. Edwards University, said she hopes the students living there will stay cautious and keep the area’s higher crime rate in mind. The area has a neighborhood watch program, but not many students participate.

“I too felt very safe and never thought of things like someone breaking into my apartment or walking through the parking lot at night alone,” she said. “It seemed so safe because there were other college kids around. However, students have to remember it is not just students living in that area.”