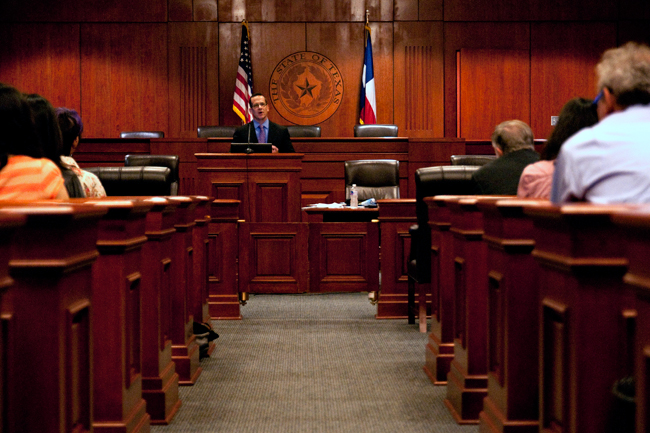 Moossy said the term “human trafficking” yields many common misconceptions about immigration and sexual exploitation. He presented a lecture on human trafficking in the Eidman Courtroom at the School of Law to educate students, faculty and staff about types of trafficking, their characteristics and common myths.

“People are under the assumption that human trafficking will always involve foreigners, the movement between borders, sex, self-identifying victims or chains and beatings,” Moossy said. “Human trafficking is a result of coercion, using force or restraint against a person in order to obtain the labor of a person. These misconceptions have to be tethered to the defendant’s intent to obtain labor or services. Where does one draw the line between a crappy work environment, trafficking and exploitation?”

Moossy, former deputy chief of the Criminal Section of the Justice Department’s Civil Rights Division, is one of 100 federal prosecutors for the U.S. Department of Justice. He said there is a distinction in cases between sex trafficking and labor trafficking. Labor trafficking involves force or restraint in seek of manual labor, and sex trafficking involves force or restraint in seek of sexual labor. Although the two are distinct, Moossy said that some cases are classified as both labor and sex trafficking. He said there was a case involving a Chicago man forcing women to work in a massage parlor and keep sexual relations with him that was classified as both.

John Nehme, chair of the advisory council for ALLIES against Slavery, said that cases of sex trafficking, such as prostitution and brothels, are seen in Austin at a high frequency. He said in addition to sex trafficking, restaurants sometimes force immigrants to work in restaurants through labor trafficking. Nehme said that as recently as two years ago, Austin did not have an ideal way to fight these local trafficking cases, but ALLIES now provides community members with a way to share resources and information through networking.

“ALLIES is a community of people in Austin dedicated to ending slavery,” Nehme said. “We make grassroot efforts at ending human trafficking here in Austin.”

Noël Busch-Armendariz, associate professor in the School of Social Work, said it is important to bring speakers like Moossy to campus to raise awareness for students about human trafficking and the efforts made to end it.

“University students, given their often newly found independence and emancipation as a college student, are often on the cusp of full civil engagement in their communities,” Bucsh-Armendariz said. “Modern slavery is a horrific crime worthy of their efforts, resources and time. As President Obama said yesterday, ‘[human trafficking] ought to concern every person, because it is a debasement of our common humanity.’”