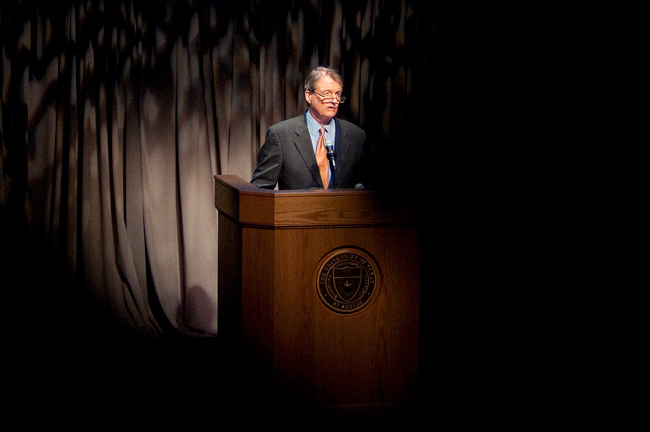 President William Powers Jr. addresses the packed B. Iden Payne Theatre at his annual State of the University Address Thursday afternoon. President Powers lauded the college’s successes and detailed a plan for its future.

UT President William Powers Jr. promoted a balance between University business plans and the mission of higher education during his seventh State of the University address. Powers spoke to a crowd of more than 250 people at the B. Iden Payne Theatre Thursday.

“By any measure, UT is one of the most efficient flagship universities in America,” Powers said. “We perform our mission at the lowest per-student, per-year cost of any university in our 12-school peer group.”

Powers said the University of North Carolina generates the most revenue among UT’s peer institutions in terms of state general revenue, tuition revenue and endowment revenue. UT generates $491 million less than North Carolina and $77.6 million less than the median revenue for the peer group. UT’s total operating revenues for the 2012-2013 school year are $1.4 billion.

“We simply do more with less,” he said.

UT should focus on using existing resources to foster success and produce high-quality education in order to push a business model and steward revenue from taxpayers, Power said.

Powers said he is “heartened” by talk of locking in tuition on a rolling four-year basis, an idea Gov. Rick Perry has endorsed. Powers said the state should show its commitment to decreasing the cost of higher
education by providing secure revenue streams while tuition is frozen.

“Predictability aids planning, and planning promotes efficiency,” he said. “If Texas wants a business plan to compete in the 21st century, it will have to address funding for higher education.”

“Cuts don’t keep you from being innovative,” she said. “In fact, I would say it makes you work to be more innovative in the classroom.”

More students apply to UT than any other college in the state, Powers said. The University received 35,430 applications this year, resulting in a freshman class of 8,092 students, the largest freshman class in UT’s history.

Powers also said outside funding for University research increased by 14.4 percent to $628 million last year. This year the National Science Foundation awarded the University $70 million in grants and awards.

Executive vice president and provost Steven Leslie said the increase in research funding is proof of the University’s work toward creating a quality research environment.

“It’s a powerful statement that draws attention to our excellence on a national level,” Leslie said. “This attracts top-tier faculty, undergraduates and graduate students to UT.”

Powers said 89 percent of all undergraduate students participate in some type of research while at UT.

The University is redesigning the undergraduate experience by combining online and transformative learning supplements with traditional in-class formats, Powers said.

Powers also touched on the increased possibility of a UT-Austin medical school and said the University is closer than ever to its creation now that a funding model has been implemented.