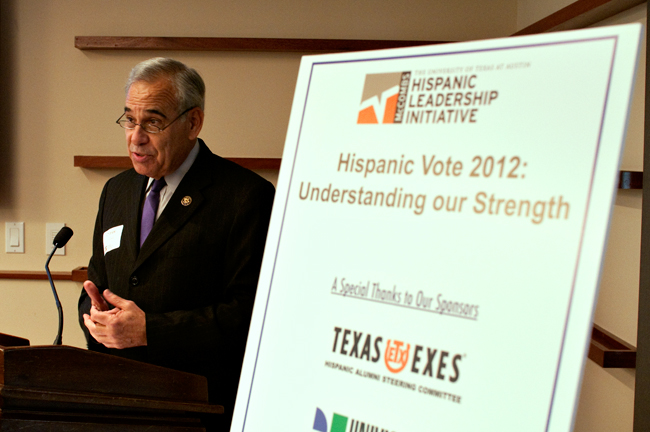 US Congressman Charles Gonzalez speaks to students about the rising number of Hispanics in United States politics. The Hispanic Leadership Summit welcomed several speakers to highlight the important role that Hispanics play in American culture.

With the political battle to win Latino voters heating up, a seven-term congressman said Latino voters have the power to influence elections if they show up to the polls in full force.

The McCombs School of Business’ Hispanic Leadership Initiative, an organization that works to promote Hispanic leadership, held its fourth annual leadership summit Thursday. The summit focused on the Hispanic vote’s impact on the upcoming elections. The summit included a luncheon with keynote speaker Rep. Charles Gonzalez, D-Texas, and panels on political demographics and Latino issues. The initiative hosts the summit each year with different themes pertinent to the Latino community, including this year’s theme, “Hispanic Vote 2012: Understanding Our Strength.”

Leticia Acosta, director of the Hispanic Leadership Initiative, said more than 100 students, faculty and UT alumni registered for the event.

“It’s not about politics but encouraging the Hispanic community to vote,” Acosta said. “We really want to get people engaged and ready to vote.”

Panelist Claudia Ortega-Hogue, the Texas director of civic engagement, said 12.2 million out of the 22.2 million eligible Latinos are projected to vote in November, a 26 percent increase since 2008, according to data from the National Association of Latino Elected and Appointed Officials Education Fund.

“There is not enough engagement in the community. People don’t know the process. They are confused about the process, especially with things like voter ID,” Ortega-Hogue said. “If they feel intimidated they will not come out and vote as projected.”

Gonzalez, the Democratic representative of Texas’ 20th district in San Antonio, said voter ID laws have the potential to limit even legitimate voters and spoke on problems with the education system not focusing on early education.

“Hispanics have reached numbers that can affect elections, even the presidential election,” Gonzalez said. “The factor within our control is participation. We [Latinos] are in a huge position to affect policy.”

Gonzalez said he will retire after his upcoming term, which will be his seventh. He said he would like to form a caucus with his retiring colleagues to shake things up in the current political system.

“I’ll be able to say many things I couldn’t before and be bold because we won’t have to worry about getting re-elected,” Gonzalez said. “I believe my successor will be Joaquin Castro, and I plan on giving him a lot of advice that he probably won’t use.”

Philosophy junior Desiree Rios said the summit was interesting and informative because she is considering pursuing a career in public office.

“It’s a great opportunity to hear what they have to say and get to talk about the issues with them, because people need to be informed,” Rios said. “I’m disappointed there wasn’t a bigger turnout by the student body.”