Longhorns lead against the Cowboys 21-17 at halftime 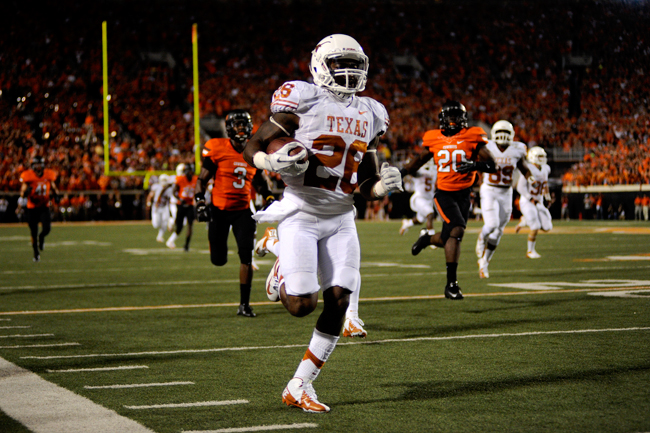 Longhorn running back D.J. Monroe returns a kickoff for a touchdown during the first quarter of the game against the Oklahoma State Cowboys in Stillwater, Oklahoma.

Texas and Oklahoma State both entered the game as top 10 scoring offenses nationally, and both teams lived up to that billing in the first half.

The Longhorns lead the Cowboys 21-17 at the break, and explosive play after play led to those points.

Oklahoma State kicked off the scoring on its second play from scrimmage when Joseph Randle broke off a 69-yard touchdown run with a burst through the left side.

Texas responded quickly however, the Longhorns converted on three straight third downs, and then a few plays later David Ash threw a beautiful 44-yard touchdown pass over the middle to Jaxon Shipley.

On the next Oklahoma State drive Texas’ defense responded after its poor first possession. Kenny Vaccaro jumped a curl route for an interception deep in Oklahoma State territory, leading to another Shipley touchdown.

However, missed tackles continued to plague the Longhorns in the first half. Randle had 147 yards in just the first two quarters, and Texas’ front four had a difficult time containing quarterback J.W. Walsh from scrambling around in the pocket.

But, the Longhorns still enter the half on top thanks in large part to the speed of D.J. Monroe. The senior speedster juked, jived and forced his way to a 100-yard kickoff return late in the first quarter. A touchdown that sits as the biggest difference in the score thus far.