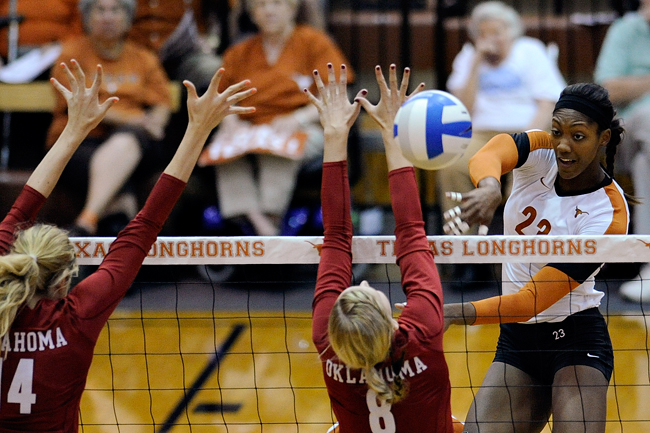 The Longhorns are starting their volleyball conference season off just like they started the regular season — basically perfect. No. 9 Texas charged into Lubbock Saturday night and came home with a 3-0 sweep over the Texas Tech Red Raiders. The win extended the Longhorn’s season record to 11-3 and 4-0 in Big 12 play.

Junior All-American Bailey Webster took the reins for the Longhorns in Lubbock. Webster came away with an impressive 14 kills and a .344 hitting average, a team high against Texas Tech. She also contributed to 14 team blocks with five of her own, a season-high for Webster.

Currently the Longhorns lead the nation in blocks per set with 3.35. The 14 posted against Texas Tech is well above that average with 4.67 blocks per set. Junior setter Hannah Allison also contributed five personal blocks, a season-high. Texas Tech turned in only three team blocks.

The Longhorns started off the match with an impressive .500 hitting average. They took the lead early at once leading 11-5. A point from Webster off Allison’s assist ended the first set 25-16.

During the second set, the Red Raiders put forth their greatest effort of the night pushing to a 9-6 lead. Hitting errors contributed to the Red Raider momentum as the lead shifted several times throughout the set. A late three-score rally capped by Webster secured the set for the Longhorns 25-23.

This is the third time that Texas head coach Jerritt Elliott and the Longhorns opened Big 12 play with a 4-0 record. The most recent came during the 2009 season, the year that the Longhorns lost the NCAA Championship match to Penn State 3-2 in Florida.

Texas will face TCU Wednesday night in Austin at 7 p.m.