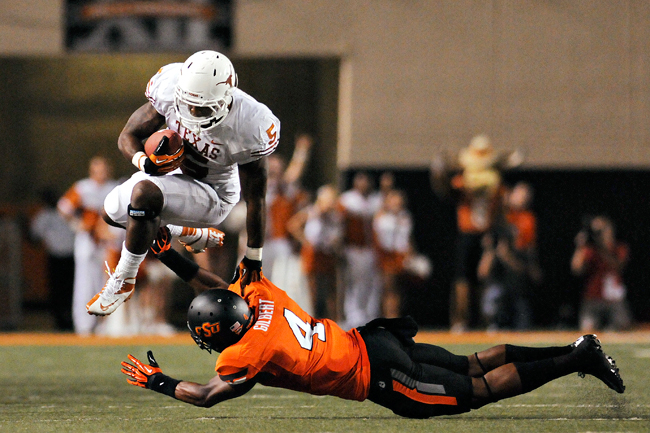 Down by two points with 2:34 left to play, Ash needed to have the drive of his life.  He did just that and led the Longhorns to a 41-36 win over Oklahoma State. On fourth and six on the Texas 29-yard line, he kept Texas alive with a quick pass to D.J. Grant for a 29-yard gain.

Two plays later, he gave Mike Davis a second chance. Earlier in the game, Davis dropped a pass in the end zone. But he caught this one from Ash and gave the Longhorns a first down at the 5-yard line.

Those late game heroics led to Joe Bergeron’s game-winning 2-yard run and a win in their Big 12 opener.

The offense thrived, even without Malcolm Brown, who hurt his ankle on his first touch, but the defense struggled. Without linebacker Jordan Hicks, who missed the game with a hip injury, the defense allowed 576 yards.

Missed tackles by safeties Kenny Vaccaro and Adrian Phillips allowed running back Joseph Randle to score a 69-yard touchdown. Randle ran all over the defense and
accumulated 199 yards.

The offense came to the rescue and evened the score on its first drive. Ash hooked up with Jeremy Hills for 15 yards on 3rd-and-14 before finding Jaxon Shipley for a 44-yard touchdown on the next play.

Shipley also had scoring grabs of 20 and seven yards.

“This last week and this week just shows that our receiver core can make plays,” Shipley said. “You can see that from today and so we’re just so excited to go out there and for the offense to depend on us receivers and for us to just be able to come through for the team.”

Against Oklahoma State last season, Ash went 0-for-8 on passes over 10-yards.

But this isn’t the same Ash.

The Cowboys tied it at 14 with J.W. Walsh’s 44-yard pass to Josh Stewart.  Phillips was injured trying to make a tackle on the play but later returned.

Saturday night was filled with quick responses by both teams.

Ash threw his first interception of the season when Tyler Johnson picked him off during the third quarter. While he responded well to the turnover, the defense did not.

During the Cowboys’ next drive, Walsh passed to Tracy Moore three times for gains of 23, 19 and 27 yards to set up a 38-yard field goal. Quandre Diggs had two pass breakups on the drive, one of them a touchdown-saving play.

Ash’s third touchdown to Shipley gave the Longhorns a 28-20 lead before Walsh’s 20-yard touchdown pass to John Goodlett. Oklahoma State couldn’t convert on what would have been a game-tying two-point conversion, cutting Texas’ lead to 28-26.

But Randle continued to pick apart the Texas defense and he scored a two-yard touchdown to give the Cowboys a 33-28 lead.

Bergeron’s one-yard touchdown run put the Longhorns ahead 34-33 after they couldn’t score on the two-point conversion.  Things got tight with 3:14 left when the Cowboys kicked a 24-yard field goal to take a 36-34 lead.

Ash and the offense did just that with last minute heroics. He went 30-for-38 with 304 yards and proved he can be clutch Saturday.  But more importantly, he proved that he that he is ready to command this offense.