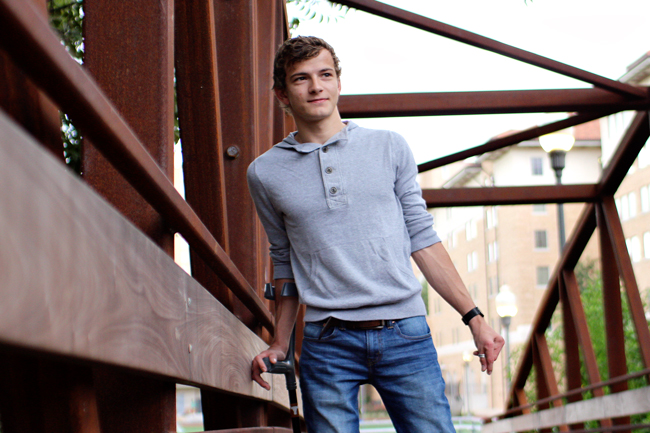 International Relations and Global Studies sophomore Alex D’Jamoos climbed Mount Kilimanjaro this past summer to promote the work of Happy Families International, an agency that pairs Russian orphans with adoptive families in the U.S.

A UT student born without functioning legs ascended Mount Kilimanjaro in Africa this summer in a bid to publicize difficulties faced by Russian orphans.

Alex D’Jamoos, international relations and global studies sophomore, lived in a state-run Russian orphanage until age 15. He was placed with a host family in the U.S. through Happy Families International Center­, an adoption agency that helps disabled Russian orphans by placing them in American homes and providing medical treatment.

He said he made his climb on behalf of the organization, which was filmed and documented to demonstrate that international adoption can help orphans in a profound way. International adoption faces opposition in Russia. Russian children aging out of orphanages are at a high risk for crime, murder, drug use and suicide, according to Happy Families.

“Russians don’t want Americans to be adopting children from Russia,” D’Jamoos said. “The organization does a lot of things to try and combat that.”

He said he climbed about 10 hours a day for three days using prosthetics and crutches for support. After two days of scaling obstacles with his crutches and prosthetics, D’Jamoos said he reached Horombo, the second camp, at about 12,000 feet. Although reaching Horombo was his goal, he decided to go farther, taking prosthetics off and crawling to the third Kibo camp at about 15,000 feet.

“I didn’t have any equipment with me so we had to cut a camping mattress and attach it to my knuckles,” he said. “My knuckles were bleeding, it was crazy.”

D’Jamoos came to the U.S. to have his legs amputated and set with leg prostheses. Although his family was only a host family, they decided to adopt him at the end of his treatment.

“In one year … he learned English fluently and was walking,” said Don Cummings, director of Prosthetics at Texas Scottish Rite’s Hospital for Children. “A year later he was on this ski trip with [our other patients] in Colorado.”

Cummings said D’Jamoos goes to fundraisers and translates between doctors from Scottish Rite and Russian doctors. D’Jamoos’ story has also been turned into a documentary recording his adoption experience by Happy Families.

After his surgeries and adoption, D’Jamoos began to help Happy Families raise awareness for adoption as well as for its I Want to Walk program, which is designed to aid children with missing limbs.

Government sophomore Ethan Levinton, a friend of D’Jamoos, said he was impressed with D’Jamoos’ ability to adapt to new circumstances so quickly.

“I actually knew Alex for between a month and two months before I knew he had prosthetics,” he said.

Levinton also said that he appreciated the ability to talk to D’Jamoos and get a different perspective on the world.

“What’s most precious to me about our friendship is that we can leave behind the current political climate,” Levinton said.

D’Jamoos said he hopes to use his degree in international relations for a career in diplomacy between the U.S. and Russia in the future.

“It wasn’t like, ‘I’m so great, I want to make a story of myself,’” he said. “It was to take one example, to demonstrate it to the Russian audience and say ‘Hey, this is reality. You get it straight. Make it so you don’t have children to be adopted out.’”

Printed on Monday, October 1, 2012 as: Climber ascends for Russian orphans