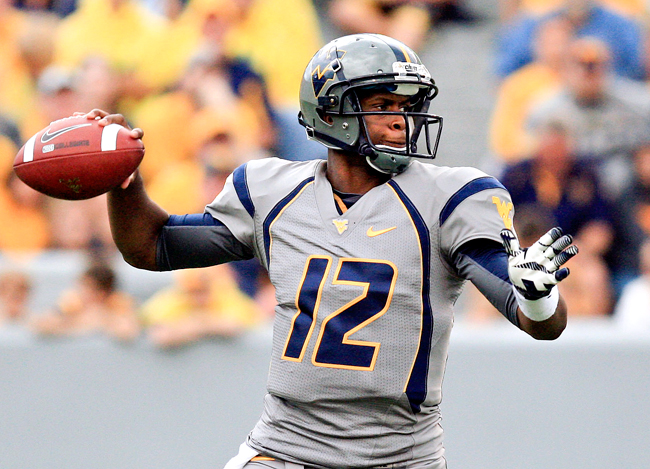 Geno Smith and the No. 9 West Virginia Mountaineers head to Austin to face Texas on Saturday. Smith has passed for 20 touchdowns and no interceptions this season and is a leading Heisman contender.

Jordan Hicks played a crucial role in Texas’ 20-13 win over No. 5 Nebraska two years ago. Playing through an injured hamstring, the freshman linebacker made a team-high 11 tackles in the upset victory.

When defensive coordinator Manny Diaz asked him to describe his experience, Hicks, now a junior, didn’t exactly have words of inspirations to offer.

“It was a blur,” Hicks told Diaz. “I don’t remember anything, the game was moving so fast. I was moving around like a chicken with my head cut off.”

The younger linebackers nodded in agreement, remembering their struggles against the Cowboys this past weekend as Hicks was sidelined with a hip injury. Led by true freshman J.W. Walsh, starting for the first time in his career, Oklahoma State racked up 576 yards in the loss.

Texas faces a much stiffer challenge this weekend when West Virginia rolls into town. In last week’s 70-63 win over Baylor in the team’s Big 12 opener, Mountaineers quarterback Geno Smith threw for 656 yards and eight touchdowns — breaking school records that he previously held.

Smith comes into West Virginia’s game against Texas as the clear favorite to win the Heisman Trophy, having thrown for 20 touchdowns without getting picked off this year. He’s completing an FBS-best 83.4 percent of his passes and his 208.4 quarterback rating is, by far, the best in the country.

Armed with a receiving corps that had three players make at least 13 catches, Smith faces a Texas defense that has made missing tackles a troubling habit.

“The tackles that we’re missing are in parts of the field and in a dynamic of the game to where they turn into touchdowns,” Diaz said. “We weren’t doing that last year. Everybody’s putting the football in space. Everybody’s attacking you vertically. It’s never been harder to tackle than it is this day and age of college football.”

The last time Texas faced an offense this explosive, it also faced a Heisman Trophy contender — and eventual winner — in Baylor’s Robert Griffin III. The current Washington Redskins quarterback torched the Longhorns for 320 yards and a pair of touchdown tosses as the Bears pounded Texas, 48-24, in their regular season finale.

“I told them to keep the Heisman away from Robert last year and they handed it to him at halftime,” Brown quipped. “I think one of the things that we did wrong last year was tell them to shut down Robert Griffin. Nobody shut him down all year. [Smith]’s going to make plays. That’s who he is.”

Many comparisons have been made between Smith and Griffin, most of them valid.

“They’re both talented guys,” junior defensive end Jackson Jeffcoat said. “I feel like [Griffin] ran the ball a little more. RG3 was a good pocket passer and Geno is, too. But I feel like Geno likes to stay in the pocket and if he can stay in the pocket, he’ll stay there and deliver a throw. We have to make him uncomfortable in the pocket.”

That will be much easier said than done.