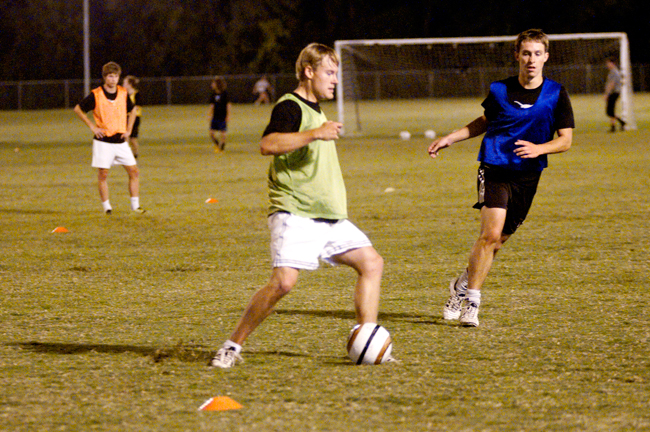 The Texas Longhorns club soccer team is coming off a 4-0 win over Texas State. Now the Longhorns are gearing up for Big 12 play and aiming for a conference championship.

With a 4-0 win against the Texas State Bobcats last Friday, the UT Men’s Club Soccer team is looking to win big in the Big 12 conference.

Earlier in the season, UT tied SMU 1-1 for its first conference game and, because of a postponed matchup against Sam Houston, had a couple of weeks off from play before it took on Texas State.

“I feel like today was a pretty good result,” senior outside midfielder Carlos Pisani said of Friday’s game. “This was a really important game to get back on track in order to get that conference championship.”

In his fourth season on Texas’ club soccer team, Pisani is feeling confident and had nothing but praise for his fellow teammates regarding the Longhorns’ upcoming season.

Out of about six or seven fifth-year seniors, most usually start, but a few are currently injured. Once they are back in the game, Pisani says that the Longhorns will have an even better squad.

With Title IX in place, Texas men’s soccer is not considered part of the NCAA like the women’s team is, but that seems to have no effect on the men’s first team player.

“Well, it’s just the rules, you know,” Pisani said. “We’ve got to have the same amount of girl sports as guy sports. It’s fair and I love playing on this team, so I really wouldn’t have it any other way. It’s awesome.”

Texas’ Saturday game against Baylor was postponed, but the team is still hyped to compete in its third conference game.

“We’ve got a really good team,” Pisani said. “Baylor beat us last year and they’re going to come out hard, but I think we’ll be superior.”

The Longhorns are relying on the fans to keep them energized as they continue their season, especially with the rivalry matchup against Texas A&M in two weeks. The Aggies are also undefeated in conference play and seem to be Texas’ biggest competition, making the upcoming home game one of the most anticipated of the year.

“The more fans the better, always,” Pisani said about the crowd. “We get pumped up and it helps us play better. The A&M game in a couple weeks is going to be really important. That’s going to be the big decider and we want to bring a full house.”

Although Texas has not been defeated in conference play, there are some things that Pisani believes they need to improve on.

“Sometimes we are little bit too direct, especially with our center midfielders,” Pisani said. “Sometimes we need to keep the ball a little bit more, especially when we’re already winning. Other than that I feel like we have a great group of guys here. We don’t have any superstars, but we’ve got a lot of good players. I think we can win out.”

Texas competes at UTSA this Friday to defend its perfect record. The Longhorns are then scheduled to play the Aggies the following week, Oct. 19 at Whitaker Fields.

Printed on Tuesday, October 2, 2012 as: Club team has promise, seeks support from fans