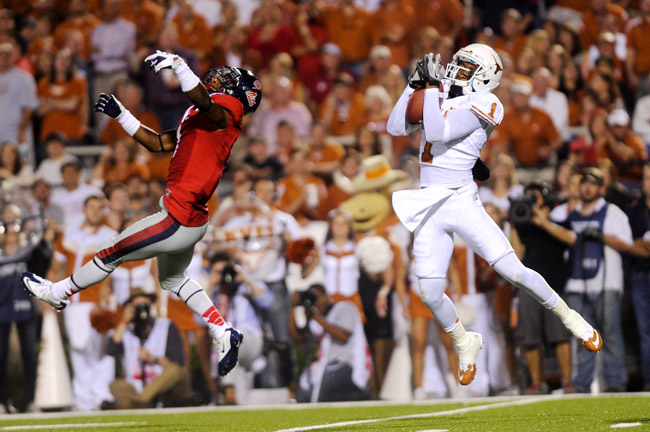 Mike Davis catches the ball on Saturday night against Oklahoma State. In the second quarter of the game, Davis dropped a touchdown pass.  On the final drive of the game, he caught a 32-yard pass that led to the game winning touchdown.

Mike Davis was upset with himself. David Ash had just delivered a perfect deep ball to the front corner of the end zone, and instead of waltzing in for an easy touchdown the ball bounced off Davis’ hands and bounded away.

On the sideline Ash was quick to come over and discuss the play with Davis, and Davis made it clear: you can come back to me.

Two quarters later, on the Longhorns’ final drive with the game on the line, Ash did just that. He saw Davis in one-on-one coverage on the right hash mark and let the ball go, trusting his receiver to make a play.

Thirty-two yards downfield, Davis and Oklahoma State corner Justin Gilbert, one of the top cover corners in the country, leaped into the air, each with fingertips extended skyward reaching for the ball. Davis, fueled by his earlier drop and two years of frustration with the offense, bounded higher and pulled the ball down, placing the Longhorns on the five-yard line.

“He was ready to make the play, and that was on him. I didn’t throw him a great ball, so he made the play for it,” Ash said.

The catch put Texas in position for the game-winning touchdown and served as a taste of redemption for a highly touted, often criticized, talented yet inconsistent junior wideout.

But to understand Mike Davis you have to go back in time a bit, specifically to his recruitment period and his first two campaigns on campus.

In 2009 Davis was one of the top-ranked wideouts in the country heading out of Skyline High School and was convinced to come to the 40 Acres, in part because of the high-powered Colt-McCoy-led passing attack the Longhorns ran at the time.

However, during his freshman season Texas went through a changing of the guard at quarterback.

McCoy graduated, and high school All-American Garrett Gilbert took the helm. It seemed like a great fit with Gilbert’s pro-style traits, but the Longhorns stumbled to a 5-7 record. Despite the team’s issues, Davis showed flashes of brilliance: He was the most effective wideout on the roster as a freshman, catching 47 balls for 478 yards and a pair of touchdowns.

But things started to go badly during his sophomore campaign while the Texas offense struggled to find an identity through mounds of turnovers. In 2011 the Longhorns featured three different starting quarterbacks, and during parts of the year there would often be a new signal caller from drive to drive as Ash and Case McCoy battled for the starter’s role.

With the QB situation in flux the passing game struggled, and by extension, so did Davis. As the team’s most explosive deep threat, his talents were ignored as the young quarterbacks adjusted to the position.

And even when they did target him downfield, the ball was so under or overthrown that he had no chance to make a play. Davis’ numbers may have improved slightly from his freshman to his sophomore season, but he still felt annoyed by the team’s inept passing.

“It was just terrible,” Davis said.

That frustration crept into Davis’ play in 2011. Late in the season his routes became less sharp — he started dropping balls and, most importantly, his confidence faltered.

But during the offseason Davis went to work. He ran sprints at 5 a.m., did pass catching drills every day in the 100-degree heat and worked one-on-one with Ash to improve their timing.

This effort slowly brought about a change in Davis. His confidence worked its way back as his attitude about the game transformed. By the end of the offseason, he was no longer an immature underclassman; he was carrying himself as a pro, and his teammates have noticed.

“He’s got a different attitude and a whole different mindset,” wide receiver Jaxon Shipley said. “As you can see, he’s gained his confidence back.”

That confidence was on full display on Davis’ fourth-quarter grab. There was no hesitation. He just went up and made the play.

The catch essentially sealed the game for Texas, but it was a bigger play than just in the context of the win. It was a signal that after two years, the Longhorn passing attack had finally arrived, and with it so had the Davis everyone, including himself, had expected.