Longhorns look to trod over TCU 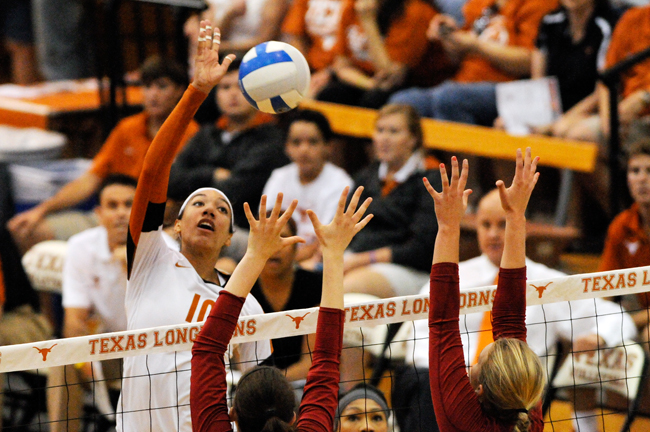 Haley Eckerman ranks 11th in the country in points per set.  She and the Longhorns hope to remain undefeated in Big 12 play.

After diving into Big 12 play with victories against Oklahoma, Baylor and Texas Tech, the Longhorns’ next challenge will be to trample a team of Horned Frogs on Wednesday in Gregory Gym.

“We’ve got some big challenges ahead, but there’s going to be some great opportunities to see where we stand in the conference,” head coach Jerritt Elliott said. “It’ll be a great match against TCU.”

As of Oct. 1, Texas led the nation in blocks per set, with sophomore outside hitter Haley Eckerman ranking 11th in the nation for points per set. Texas swept TCU at last year’s meeting in September, with 10 kills from then-freshman middle blocker/outside hitter Khat Bell and 36 assists from then-sophomore setter Hannah Allison.

“Our blocking is really, really good,” Elliott said. “This may be the best blocking team we’ve had. Our defense continues to improve, which we’ve put a lot of stress on in the next few weeks. A lot of it is getting comfortable with our players on the floor, which will be a key component for us.”

The Horned Frogs are not without important assets of their own: junior middle blocker Yvonne Igodan was Big 12 Offensive Player of the Week earlier this season. TCU currently ranks first in the Big 12 for opponent hitting percentages and service aces. They also rank above the Longhorns in digs per game.

Elliott said a key point of focus heading into Wednesday’s match is allowing the young team to gain traction and find its comfort zone on the court.

“For a lot of these young players, it’s building their confidence slowly,” he said. “We’ve got to do this the right way and be patient with them and also teach them that they can play at a high level and be confident.”

Maintaining a consistent equilibrium throughout the game is another area of importance, Elliott said.

Printed on Wednesday, October 3, 2012 as: Horns aim to continue success in conference