All eyes on first debate 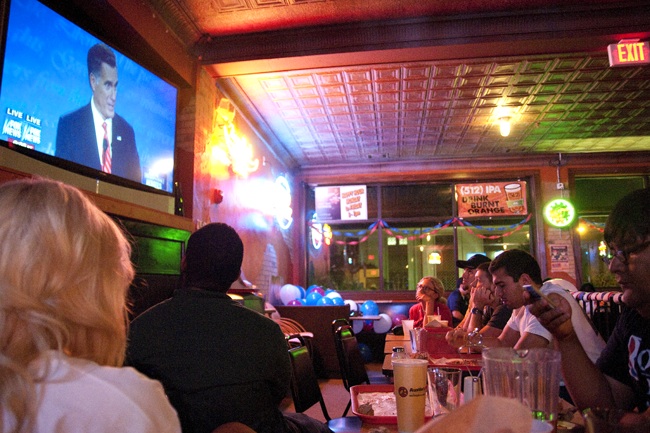 Members of University Republicans gathered at Varsity Bar above Austin’s Pizza on the Drag to watch the presidential debate Wednesday. Various venues tuned into the live debate for viewers to hear Obama and Romney discuss healthcare, social security and the economy.

Students across political ideologies organized various watch parties on and around campus for the first presidential debate Wednesday night. At Cuatros students and community members chanted “Fired up! Ready to go!” prior to the start of the debate at an event hosted by student organization University Democrats.

The two presidential candidates, President Barack Obama and Republican challenger Mitt Romney, sparred on economic policy, the deficit, health care and the role of government during the 90-minute political showdown, live from the University of Denver. The debate, the first of three, was moderated by former news anchor Jim Lehrer.

In his opening statement Obama said despite the economic troubles that existed when he took office, the country has managed to see steady economic improvement.

“Because of the resilience and the determination of the American people, we’ve begun to fight our way back,” Obama said. “Over the last 30 months, we’ve seen 5 million jobs in the private sector created, the auto industry has come roaring back and housing has begun to rise.”

Immediately after, the president turned his attention to the future.

“But we all know that we’ve still got a lot of work to do,” Obama said. “So the question here tonight is not where we’ve been, but where we’re going.”

“I’m concerned that the path that we’re on has just been unsuccessful,” Romney said. “The president has a view very similar to the view he had when he ran four years [ago,] that a bigger government, spending more, taxing more, regulating more — if you will, trickle-down government — would work. That’s not the right answer for America.”

“We were sending $60 billion to banks and lenders as middlemen for the student loan program,” Obama said. “We said, ‘Why not cut out the middleman?’ And as a consequence, what we’ve been able to do is to provide millions more students assistance, lower or keep low interest rates on student loans. And this is an example of where our priorities make a difference.”

Responding to a claim made by the president, Romney said his education plan would not cut from student support.

“I think a lot of good points were brought up during the debate,” Tisdale said. “However, I think a lot of the truths that Obama was trying to convey were twisted by Romney.”

The College Republicans at Texas held a watch party at Austin’s Pizza where spokesperson Danny Zeng said he was pleasantly surprised by Romney’s performance.

“Romney did terrific,” Zeng said. “I wasn’t expecting it, honestly. I think he led the debate. He controlled the floor, and Obama, for whatever reason, tonight looked very fatigued and wasn’t engaging the debate or the audience.”

The style of the debate, which was void of any buzzers, bells or strict time restrictions, lent itself to direct engagement between the two candidates. While most of the debate was dominated by economic and health care discussion, the candidates did offer their take on public and higher education.