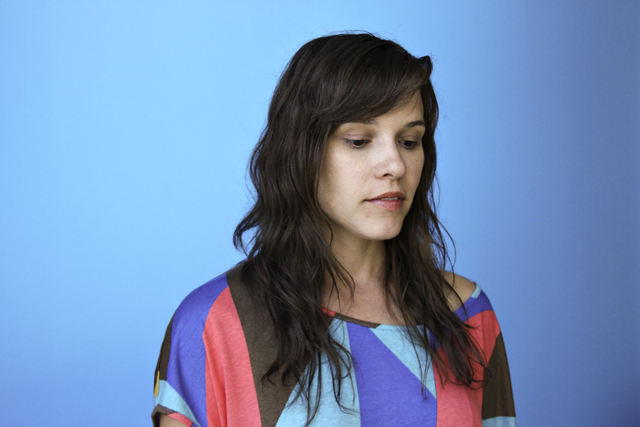 Local musician Dana Falconberry is releasing her third album, Leelanau, on Thursday. Her six-piece band is also joined on the record by the Austin-based Tosca String Quartet.

In a town overflowing with indie rock bands, Dana Falconberry’s alternative musical style is as refreshing as the “Crooked River” she depicts in her latest release, Leelanau.

Falconberry lived in Michigan until she moved to Arkansas to attend Hendrix College. She majored in music business and aspired to open up her own dance company. Growing up as a ballet dancer, she ultimately decided to switch her creative medium to music and songwriting.

“When I wrote [songs], it was exactly what I wanted to say,” Falconberry explained, “Dancing was too choreographed and frustrating.”

After graduating, she spontaneously relocated to Austin in hopes of becoming a musician.

“I moved here somewhat blindly. I didn’t even know anything or anyone here; it was crazy,” Falconberry said.

However, since her arrival in 2004, she’s toured the United States and played in Japan, France, Portugal, the U.K. and the Netherlands. She has released two albums so far, Paper Sailboat in 2006 and Halletts in 2010. She recently signed to Oakland, Calif., record label Antenna Farm and is set to release her third album, Leelanau, on Thursday.

“I’m so excited for her release,” Chase Weinacht, Austin rock band Marmalakes frontman, said. “I have so much respect for her music. I can’t really say enough about how much I like Dana.”

Leelanau marks a dramatic turn from Falconberry’s previous style of sparse instrumentation, which she attributes to the compatibility she found with her band. Although her performances are credited solely to her name, she emphasized the indispensable role other musicians play.

“They’ve changed the way that I write, perform and record,” Falconberry said, “The project is definitely more like a band now than anything else.”

In addition, for this recording, the six-piece band is joined by the Austin-based Tosca String Quartet, who have been playing together since 1997. Comprised of two violins, a viola and a cello, the group appears on seven of the 14 tracks, playing cathartic melodies orchestrated and arranged by Christopher Cox, Falconberry’s melodica player.

“Recording with Dana was great,” said Sara Nelson, cellist of the group, “All of the songs are beautiful and filled with beautiful vocal harmonies; it’s all really great stuff.”

Leelanau is saturated with surprising sound clips, obscure instrumentation and lyrical themes of nature that converge to illustrate flawless romantic landscapes. It is the background music to a hike through Zilker Park, complete with chirping birds and running water.

“This time I was more interested in exploring and creating scenes that couldn’t exist in the real world. I was focusing on a lot of imagery instead of straightforward things like heartbreak and being lonely,” Falconberry said.

Her falsetto vocals are delicate whispers that seem breakable if the volume is turned up too loud. When adjoined with backup singers Gina Dvorak and Karla Manzur, the trio operates in perfect harmony and inspires listeners. The multi-layering of high-pitched harmonies is similar to singer/songwriter Elliott Smith, but the environmental fascination that permeates her work likens her to painters Albert Bierstadt and Thomas Moran.

“I drew a lot of influence from the environment, camping trips, short stories and movies, mostly anything that can visually transport me to a different world,” Falconberry said.

The gorgeous aural soundscapes take listeners through all four seasons the Michigan’s Leelanau Peninsula experiences. The album ends the way it began, with wisps of guitar plucking layered over eerie high-pitched sounds, illustrating both the cyclical tendencies of the natural world and the likelihood of an audience member to listen to again and again.

“I just want to play more music and have the same weird adventures. I have no huge aspirations,” Falconberry said. “Playing music alone is a huge aspiration. That’s all I want, nothing more than that.”

Leelanau will be released Thursday at the Scottish Rite Theater on Lavaca and 18th streets. Marmalakes and indie rock band Good Field will open the show. Dana Falconberry and her band will be joined on stage by the Tosca String Quartet and Elaine Barber on harp.