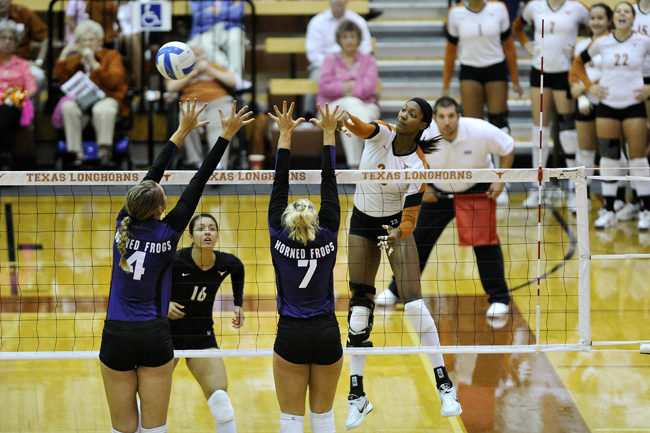 Despite a skittish second set, Texas relied on powerful performances and team unity to sweep TCU 3-0 at Gregory Gym on Wednesday.

“We came out pretty strong and played well, then got on our heels a little bit,” head coach Jerritt Elliott said. “I was very proud of how we responded.  We were able to find ourselves and get our rhythm back.”

Texas kicked off the first set with six unanswered points, punctuated by two kills by freshman Molly McCage. UT quickly gained a 10-point lead before the media timeout. After a five-point run by TCU, outside hitter Haley Eckerman polished off the set.

Set two ran a bit less smoothly for Texas, as the Longhorns struggled to maintain a consistent lead. The set was tied six times as Texas trailed behind before regaining the lead after a kill from senior utility Sha’Dare McNeal. After TCU gained a three-point lead, Texas answered with a six-point run to take the second set.

“I felt like we were really jittery,” Elliott said of the second set. “We were trying to get good swings, we had a lot of opportunities and we just shot ourselves in the foot early on. We made mistakes and started questioning ourselves, and it’s fragile, the confidence of a game.”

After grappling for the second set, the Longhorns came back stronger and surer for the third set. The set opened with a close battle for points between the two teams, with four ties in the score before Texas grabbed the reins. Five different Longhorns tacked on kills to sway the third set toward Texas’ favor and complete the sweep.

“Ultimately we were able to get back and get calm, and that was a really pleasing thing to see in terms of how to play the game a little better than we did in game two,” Elliott said.

Despite several strong performances, Texas did not tally as many blocks as expected. The Horned Frogs effectively avoided blocks, changing the rhythm of the game and demanding a response from Texas.

“I think with any team you have to be smart,” Webster said. “They’re going to have good blocks. You have to be yourself and make it work.”