Obama and Romney delve into the details 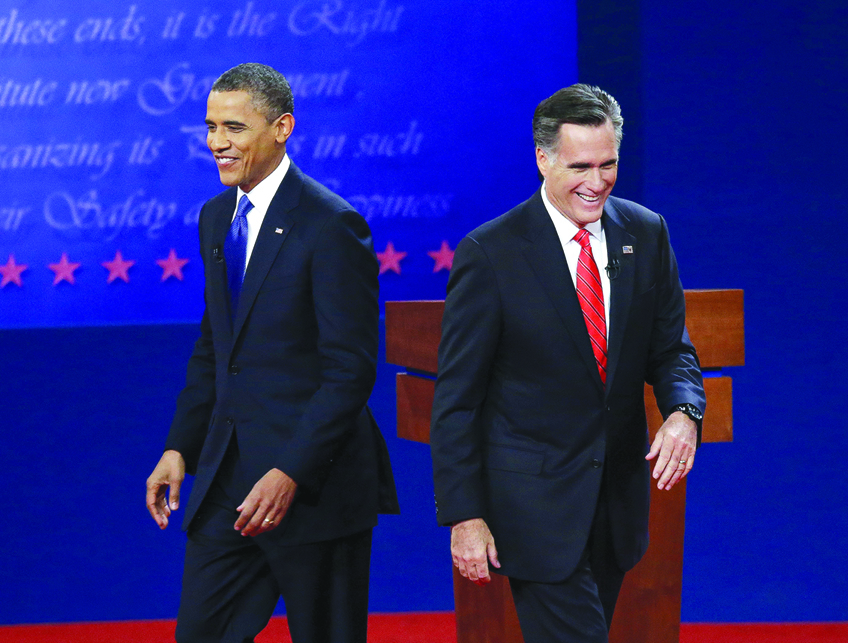 Republican presidential candidate, former Massachusetts Gov. Mitt Romney, right, and President Barack Obama, left, walk on stage at the end of their first debate at the University of Denver, Wednesday, Oct. 3, 2012, in Denver.

DENVER — Americans demanded details and, boy, did they get them.

In their first debate, President Barack Obama and Republican Mitt Romney delved into dense discussions on taxes, health care, entitlement programs and more. Each candidate unleashed a flurry of statistics and complex equations for bringing down the debt. And they tossed around references to policy proposals like “Simpson-Bowles” and laws like “Dodd-Frank” that are hard to understand for many Washington insiders, let alone average voters.

“It’s fun, isn’t it?” Romney, a successful businessman, interjected at one point.

The wonkish policy debate was a stark contrast to the monthslong campaign, filled with broad-brush and harsh attacks by the two candidates on one another. And it was a clear appeal to the small sliver of undecided voters, both independents and unaffected voters in each party, who are less partisan and more interested in hearing solutions.

Romney, a successful businessman, seemed to relish the down-in-the-weeds debate.

Obama, a former constitutional law professor, was willing to play along. But his long, detailed answers may have fulfilled his campaign adviser’s biggest fears. They had spent weeks working on winnowing down the president’s answers, only to watch him revert to the long-winded answers that they believe don’t always connect with the public.

The audience in the debate hall was silent, shrouded in darkness. Their only audible response to either candidate was a quick smattering of applause when Obama opened the debate by wishing wife, Michelle, a happy 20th anniversary, which fell on the same night of the debate.

At times, moderator Jim Lehrer seemed to struggle to keep control of the conversation. So Romney tried to take over for him.

“Right, right — but —but,” Romney said as Lehrer was competing to speak. And then the GOP nominee got in a retort to Obama: “Virtually everything he just said about my tax plan is inaccurate.”

Some of Romney’s confidence may have come from the fact that many of the detailed points he made on the debate stage have long been a part of his regular campaign speeches. While his fluency on complex economic issues may not always translate with voters on the campaign trail expecting a rousing speech, it gave him an opportunity to look confident standing toe-to-toe with
the president.