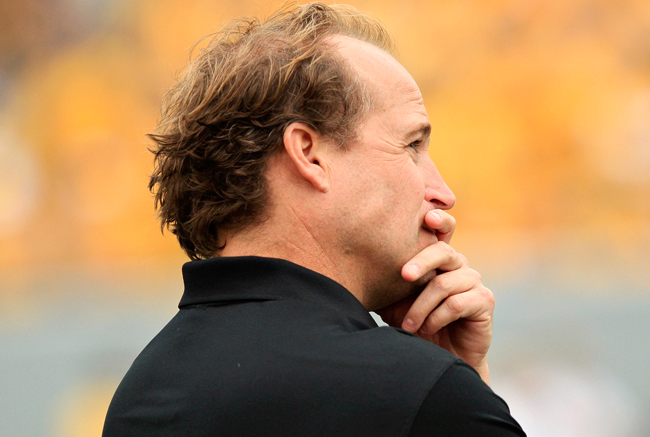 West Virginia coach Dana Holgorsen looks on during the Mountaineers' game against Baylor in Morgantown, W. Va. Sept. 29. West Virginia defeated Baylor 70-63. Holgorsen is known for his efficient offensive schemes but all eyes will be on how his defense can stop a surging Texas team that seems to have regained strength.

If you’re going to play Texas … well, honestly, I don’t know how to astutely finish that phrase.

Because neither I, nor the No. 7 West Virginia football team, have ever ventured to the land of cowboy boots and 60,000-seat high school football stadiums.

Technically, West Virginia has played the Longhorns in Austin once before — a 7-6 victory by the Mountaineers in 1956 — but, when No. 11 Texas welcomes WVU to DKR-Texas Memorial Stadium on Saturday night, it will be a completely different experience.

For starters, the crowd.

With more than 100,000 expected in attendance Saturday night, it could mark the first time in West Virginia football’s history that the Mountaineers have played in front of a six-figure crowd.

They have come close with road tilts against Penn State and LSU in recent years, but have never crested the 100,000 mark.

And, with a Facebook page created by Longhorn fans entitled “Make Geno Deaf” in anticipation of presenting a raucous environment for West Virginia senior quarterback and Heisman hopeful Geno Smith, one can expect the crowd will play a major factor in the Mountaineers’ first Big 12 Conference road game.

One member of the West Virginia football has frequented the state of Texas and Austin, though, and that would be head coach Dana Holgorsen.

Holgorsen spent time at Texas Tech, Oklahoma State and Houston as an offensive coordinator before taking the head coaching position in Morgantown.

The second-year head coach was able to use his Big 12 experience to rack up 70 points against Baylor last Saturday, but will he be able to do the same against Mack Brown’s talented Texas defense?

As for West Virginia quarterback Smith, Saturday presents a great opportunity to prove his critics wrong.

Smith has put up mind-boggling numbers through four games this season, but one could argue those statistics have come against sub-par opponents in Marshall, James Madison, Maryland and Baylor.

But anytime a signal caller throws more than 1,700 yards and 20 touchdowns to zero interceptions in just four games, one can’t help but notice.

If the Mountaineers want to keep pace with the Longhorns, however, they’re going to need yet another stellar performance from Smith.

One of the biggest question marks entering this matchup of ranked teams is if WVU starting running back Shawne Alston will play. Alston, who has missed the last two games with a thigh bruise, brings balance to a West Virginia offense which has been forced to be one-sided in his absence.

Essentially, West Virginia is a much more dangerous offense when it’s not one-dimensional.

But this game will come down to more than statistics.
This game is more than about a win or loss for the Mountaineers.

It’s their opportunity to prove to the state of Texas and the nation that they are Big 12-worthy.

That they made the right choice to leave the sinking Big East Conference ship.

But, ultimately, the Mountaineers will learn from this experience.

After Saturday’s contest, West Virginia will find what it takes to play in Texas.