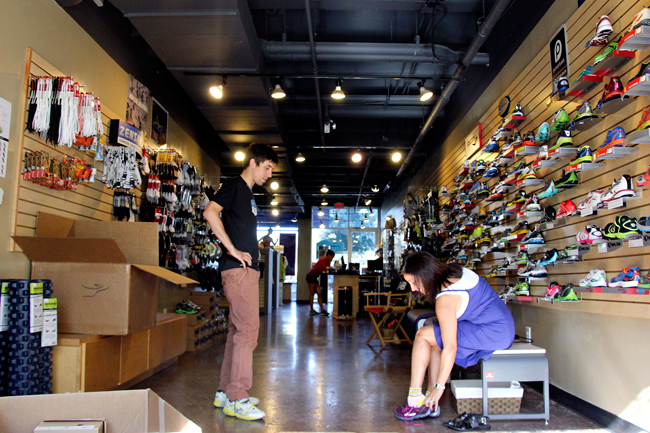 The Naked Foot 5K may sound like a charity-sponsored streaking contest, but the truth is a little more complicated. On Saturday, participating runners will donate their old sneakers to Soles4Souls and hit the pavement without the protection and or support of shoes. Clothing, however, is not optional.

Partnering with Altra Zero Drop Footwear and several other sponsors, The Naked Foot 5K is in its second year of traveling around the country, from D.C. to Seattle. In addition to a 5K race, participants may also choose to paddleboard and run an obstacle course.

But why race barefoot? Those who are not avid runners might view this style as a delusional date with glass shards and other hazardous debris. Yet the health implications are more nuanced than a few painful perforations. In recent years, mainstream podiatry has come under the spotlight by a number of researchers, spawning a trend across the country.

Journalist Christopher McDougall is attributed to the popularization of minimal shoes and barefoot running. In his 2009 national-bestselling book, “Born to Run,” McDougall rails against medical practitioners and profit-seeking companies who encourage the use of overly supportive sneakers. Referencing a group of indigenous Mexican ultra-runners,

McDougall cites this tribe as living proof that shoes cause greater injury than they prevent.

This very same group of natives, the Tarahumara, has even competed at the Texas Relays. In 1925, as part of a rare publicity stunt, six tribesmen ran unshod from San Antonio all the way to the Memorial Stadium at UT, a journey of approximately 89 miles.

Biomechanics researchers have puzzled over why these ultra-runners can run such long distances without injury. Dr. Daniel Lieberman, a professor of human evolutionary biology at Harvard University, claims that striking the ground with the front of the foot rather than the heel makes the impact of running easier to absorb. This in turn helps reduce joint pain, improve posture and strengthen calve muscles. Running without shoes also toughens up runners’ feet by producing callouses over time that protect sensitive nerve endings.

Katie Watson, College of Liberal Arts sophomore and Texas cross country team member, said that three separate stress fractures in the last year have prevented her from continuous running. In an attempt to recover from ailments caused by overuse, Watson hopes that less support will rehabilitate her in the coming months.

“It’s been rough,” Watson said. “But I’ve been running barefoot for all my runs recently, and it helps you [use] the front of your foot more so that you don’t get injuries in the upper leg.”

In response to the increasing popularity of minimalist shoes, competing footwear brands, such as New Balance and Vibram, have flooded the market with smaller and lighter shoes designed to mimic the barefoot feel.

At the Hill Country Running Co., manager David Hodges shows off a wide array of neon-colored sneakers, most of which now feature a zero-drop heel.

“It definitely changes up your gait a little bit,” Hodges said. “Zero-drop means there’s no heel support, so you’re pretty much barefoot minus a little bit of padding underneath.”

Although companies are selling shoes with less support as well as less material, prices haven’t budged, and customers will have to drop at least $105 for a reliable pair, Hodges said.

As one of the many sponsors for the Naked Foot 5K, the Hill Country Running Co. will sell running gear and talk to racers about the benefits of using shoes with a lower “heel-to-toe ratio.”

Soles4Souls will distribute donated shoes in countries affected by natural disaster, including Japan and Haiti, where it is unsafe to travel barefoot.