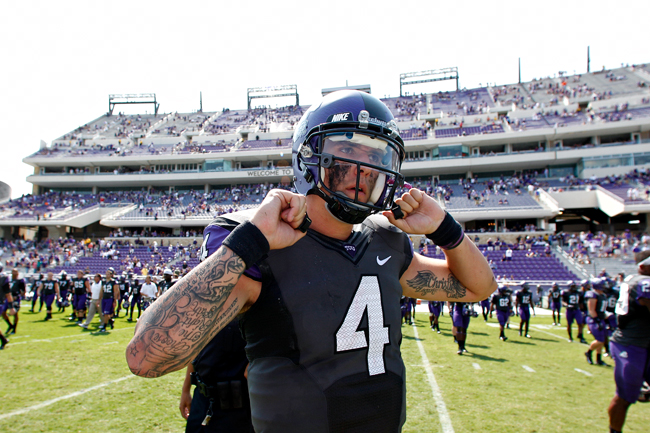 The weather is nice and the football season is well underway, which can only mean one thing. It’s October, folks. Let’s take a look at some notes from around the country this week-

• Miami athletic director Shawn Eichorst has left his post at the University and is expected to replace Tom Osborne at Nebraska, when Osborne officially retires on January 1st.

• Georgia’s leading receiver, Michael Bennett, tore his ACL in practice this week and is out for the season. Bennett, a sophomore, has 24 catches for 345 yards and four touchdowns on the season and has played a pivotal role in the Bulldogs’ offense. Georgia is fairly deep at receiver and will fill Bennett’s role with Marlon Brown, and Tavarres King.

• Florida linebacker Jelani Jenkins is expected to be ready to play against LSU this Saturday. Jenkins fractured his thumb against Texas A&M in the second game of the season. The junior linebacker had 75 tackles last season and is one of the Gators’ most valuable defensive commodities.

• Missouri wide receiver Dorial Green-Beckham, once a Texas recruiting target, was arrested along with three other teammates for possession of marijuana on the school’s campus. All three are suspended for Saturday’s game against Vanderbilt. Green-Beckham scored an 80-yard touchdown against UCF last week.

• Last month it was reported that Arkansas head coach John L. Smith was in approximately $25.7 million of debt. This month that number has risen to upwards of $40.7 million. Smith initially filed for bankruptcy in early September. Along with his finances, Smith’s football program is in a complete tailspin. The Razorbacks are 1-4 after sitting in the Top 10 during the preseason. The road doesn’t get any easier for the Hogs either, as Arkansas visits Auburn this weekend.

• The Atlantic Coast Conference will continue to play just eight league games per year instead of switching to nine in 2013. The decision was made to preserve Florida State, Clemson, and Georgia Tech’s rivalries with SEC schools. Notre Dame will begin an annual five-game ACC schedule
beginning in 2014.

• Two teams have a shot at becoming bowl-eligible this weekend. The winner of the Georgia-South Carolina game will be bowl bound and if Northwestern can pull off the victory over Penn State in Happy Valley, the Wildcats will have a postseason to look forward to after all.

• Alabama has lost running back Dee Hart and receiver DeAndrew Smith for the season. Both players injured their knees versus Ole Miss last Saturday. Hart tore his ACL before his freshman season last summer forcing the ball carrier to redshirt. Hart had 88 rushing yards on the season.

• The Duke Blue Devils are 4-1 and coming off their best start since 1994. In fact, Duke has only had three 4-1 starts in the past 30 years. Fans aren’t jumping on the bandwagon just yet, for the Blue Devils started the season 3-2 in 2011 before dropping seven straight games to finish the season.

• Former Penn State assistant Mike McQueary has filed a lawsuit against the University claiming he was mistreated during the Jerry Sandusky scandal. McQueary is seeking millions of dollars in remedies and if the former coach is victorious he will receive more money in damages than some of Sandusky’s victims.

• Ohio State and TCU will begin a home-and-home series in 2018. The series gets underway Sept. 15, 2018, when the Buckeyes visit Fort Worth.