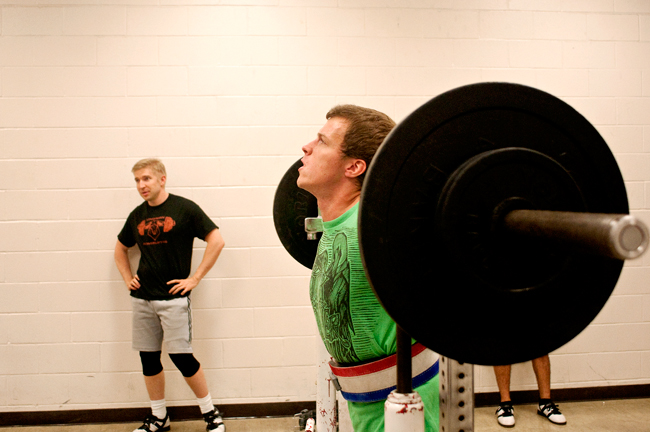 At the back of the public weight room at Gregory Gym is a small, windowless room with a small sign that reads “Powerlifting.” The Longhorn Powerlifting team, while not a Division I athletic team, stays active and lifting through the efforts of volunteer coaches and motivated students.

Texas boasts superb powerlifting talent, especially in the muscles of psychology sophomore Ian Bell and exercise science junior Preston Turner. The two are roommates, and Texas knows how good roommates can be: Both hold several state, national and international titles, plus a couple of world records in their respective weight classes.

Turner hails from Victoria, Texas, where he excelled in many different sports in high school, including baseball and football. As a freshman, he began powerlifting and was hooked. According to Turner, lifting is big in Texas high schools, because it is a way to stay in shape during the football offseason. As a senior he was recruited to play football by several smaller schools but decided to come to Texas and focus on lifting.

“It is really for the love of the sport,” Turner said. “It’s highly addicting.”

Turner and Bell have both been around the world for powerlifting, including to the Czech Republic, Canada and Poland.

At the 2012 IPF Junior World Championships in Szczyrk, Poland, both Turner and Bell set world records. Turner set a record on the bench press with a lift on 684 lbs, which is not his personal best. His personal best of around 700 lbs came at a bench press-only competition rather than a full meet.

“It’s definitely a lot of dedication, because you can’t get back the days you missed,” Turner said. “It’s not about coming in and maxing out everyday; it’s about working through a plan.”

Bell comes from a powerlifting background. His father, Gene Bell, who has a couple of world titles under his belt, was a huge motivating force in Bell’s career as both a trainer and a role model. Bell started when he was 13, wanting to follow in the family footsteps.

Like Turner, Bell holds a couple of world records, including one in deadlift for his weight class, a record he set when he traveled with Turner to Poland earlier this year. His personal best is a deadlift of 810 lbs achieved at the GNC International PRO Deadlift Competition.

Despite everyone competing individually, powerlifting in college is not like it is in high school.

“We focus on team here because powerlifting in college is a team sport,” Bell said. “We are always encouraging each other, trying to make each other better.”

Since it’s not a Division I sport, most of the lifters have lives outside of the weight room, including demanding majors that require a lot of time management.

“School always comes first,” Turner said. “But I think it’s healthy to come in here and throw around some big weights, especially during a stressful week.”

Even if some are not at the top of the class or into the intense competitions like Turner and Bell, some people find advantages to participating in powerlifting.

“I think being strong is a really sexy trait, whether it be mentally or physically,” psychology junior Ploy Buraparate said.

Several women have found a home among the Texas powerlifting team, denying the stigma that weightlifting is only for men.

“It is kind of intimidating, but at the same time there is just a lot of camaraderie,” Natalie Escareno, an English and communication science and disorders senior, said. “It is fun. The one thing I love about this sport is that it is about how much you train, how much effort you put into it.”

Escareno said powerlifting is 100 percent different compared to bodybuilding, and women should not be afraid of joining.

“We are always looking for girls,” Escareno said. “There is always this misconception that this is bodybuilding, but it’s not. We are as girly as can be.”

The team is led by Turner and Bell, along with economics senior Austin DeShane, who is the president of the group. Their current unofficial coach is stepping down as he completes his schooling to join the workforce.

“We are working together to coach the team and all the new guys,” DeShane said. “It’s a team dynamic where everybody’s got your back, everybody’s looking out for each other.”

Printed on Friday, October 5, 2012 as: Athletes working for love of lifting