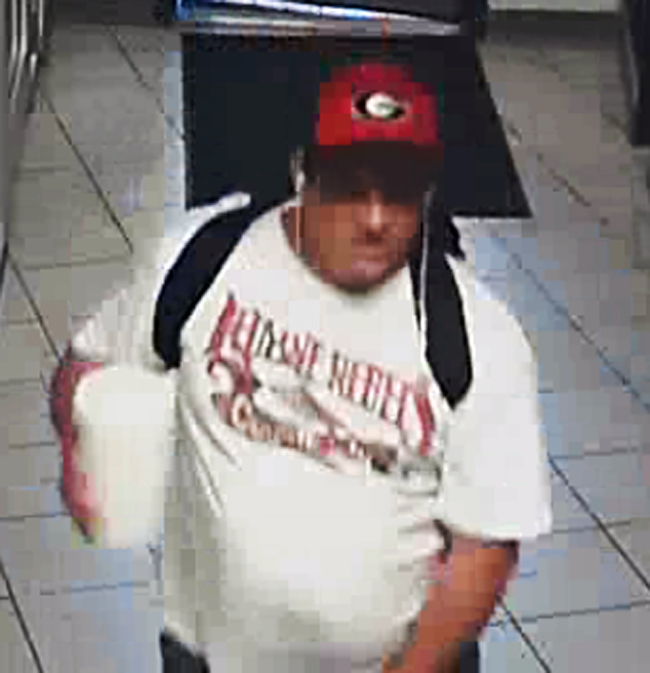 This photo from surveillance footage shows Scott Allen Chatagnier on the day he allegedly pulled eight fire alarms in buildings around campus (Photo Courtesy of UTPD).

UT’s fire-alarm bandit, identified last month by police as Scott Allen Chatagnier, Jr., 42, was arrested early Thursday morning after police say he pulled a knife on a bouncer at a downtown bar.

Police said Chatagnier was denied access to Dirty Dog Bar Wednesday night because the doorman there felt Chatagnier was too intoxicated. Chatagnier proceeded to shout some racial slurs at the doorman and then pulled out a pocket knife, police said. The doormen from Dirty Dog Bar and the neighboring bar Coyote Ugly Saloon then tackled Chatagnier and restrained him until police arrived, police said. Police had been searching for Chatagnier since Sept. 13 when a warrant was issued for his arrest in connection with the unnecessary pulling of 11 fire alarms on campus between 2:08 p.m. and 3:53 p.m. Sept. 10 and more alarms at Dobie Mall earlier that day, police said.

Chatagnier’s son, Dillon Scott Chatagnier, was killed in a fire in October of 2010 at the age of 18. His daughter, Karissa Chatagnier, died prior to his son, according to Dillon Chatagnier’s obituary in the Beaumont Enterprise. According to the obituary, Dillion Chatagnier died Oct. 16 in a fire at a camp house in which he sacrificied his life to get his friends out of the burning house. It is unclear if there is any connection between the false alarm reports and the death of Scott Chatagnier’s two chidlren. Chatagnier was unavailable for comment. He remains in the Travis County Jail on $95,000 total bond.

As a result of the alleged pocket-knife incident, Chatagnier was charged with two second-degree felony counts of aggravated assault with a deadly weapon, punishable with separate maximum penalties of two to 20 years in prison and a fine of up to $10,000. He was also charged with two class-A misdemeanor counts of false alarm or report for the unnecessary pulling of the alarms, punishable with separate maximum penalties of a fine up to $4,000 and up to one year in jail.

According to the Sept. 13 affidavit, police spotted Chatagnier near campus Sept. 12 and recognized him from images captured by UT and Dobie Mall security cameras Sept. 10 during the false alarm pullings. After being questioned by multiple officials that day, Chatagnier said, “I’m not denying it was me,” when shown a still photograph from the Sept. 10 surveillance. Later that day, a cap resembling the one shown in the still photograph was found at Chatagnier’s apartment. Authorities had been searching for Chatagnier since approval of the warrant Sept. 13.