Student mascots detail on how to be Hook ’em 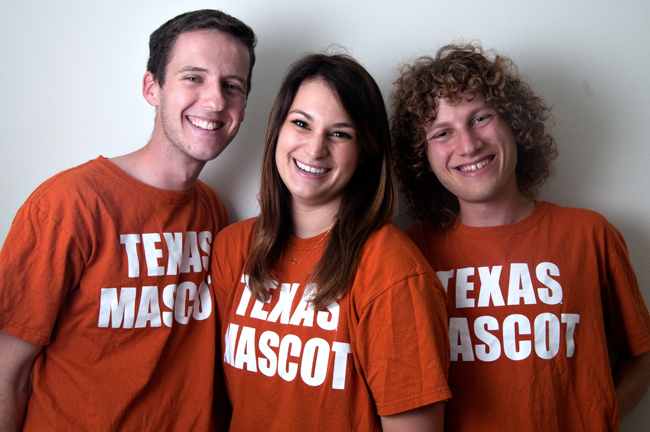 From left to right, Evan Rowley, Caroline Carmer and Michael Graff are the faces behind UT mascot Hook’ Em.

Hook ‘em mascots Caroline Carmer, Evan Rowley and Michael Graff will give you the evil eye if you call them Bevo while in uniform. Many students on campus are unaware that Hook ‘Em is not Bevo, but the three have made it their goal to change that.

The Daily Texan spoke with the three Hook ‘Ems about their favorite pump-up songs, if Chuck Norris could be Hook ‘Em and their love for dropping it low during football games.

Daily Texan: Chuck Norris can do many things, but do you think he could be Hook ‘Em?

Caroline Carmer: I don’t know if he has what it takes.

Michael Graff: I don’t think he could because, although he may have the machismo, he wouldn’t be goofy enough. He would be too robotic and serious; someone would offend him and then he would beat them up. Or he would pull a prank and then it becomes the most epic thing ever.

Rowley: Chuck Norris is his own mascot.

DT: How many push-ups can you do in the suit?

Carmer: I can’t do a lot of push-ups normally, so not that many. [laughs] If I’ve had, like, nine Redbulls before the game, then maybe I can get a lot more done.

Graff: I’ve done as many as 30 — that was at the last soccer game. I was hanging out with a group of friends and they yelled, “Drop! Give us push-ups!” So I dropped and did 10 push-ups. Then a few minutes later, they wanted me to drop again, so I dropped and did 20 push-ups. Push-ups in the suit are really awkward since the head is so big and the snout comes out. So the head hits the ground before you do.

Rowley: 400, tops. Or as many points as UT scores. But realistically, somewhere around 50.

Graff: You need swagger. If 10 is the highest, then it has got to be a 10. If you have no swagger, you’re not animated, in my opinion. You need to have that energy and exaggeration in order to make Hook ‘Em that much more enjoyable to the people.

DT: Since you cannot see through your peripherals, have you ever been kicked by a cheerleader or hit by a football?

Carmer: I have a lump on my shin from running into the bleacher during one of our home games. But I run into stuff even when I’m not in the suit, so yeah. [laughs] Hook ‘Em definitely has some battle wounds.

Graff: I almost got hit by a football this past Saturday. I was talking with Coach Durrett about something I had to do in the end zone, then all of a sudden I heard “Watch out” as the football headed in my direction. Luckily it landed like 10 feet away from me. I’ve never been hit by a cheerleader, but I have walked into stuff that I couldn’t see. At the game I tried standing on a bench to interact with fans, and as I was stepping off, I fell and got a bruise on my thigh. You can get hurt being a mascot — it is extreme.

Rowley: I haven’t been hit or hit anything, but I bump into things a lot. I’ve backed into cheerleaders, bumped into walls and pedestrians. I’ve even missed a few high fives.

DT: If you have one, what does your pump-up, pre-game playlist consist of?

Carmer: “Let’s Go,” by Trick Daddy. I really like that song.

Graff: I listen to a lot of And So I Watch You From Afar when I’m working out and getting pumped up for stuff. It has that angry edge to it, but it doesn’t have the shouting or screaming.

Rowley: “Air Force Ones,” by Nelly. We just got a pair of Air Force Ones [for the suit], so we always have that playing. I also listen to a lot of Girl Talk before games and events. Also “Drop It Low,” by Ester Dean. When in doubt, drop it low.

DT: Is there any sibling rivalry between you and Bevo?

Carmer: [Hook ‘Em] is so different, you know? It is hard having an older brother, but Hook ‘Em does his own thing.

Graff: I’d like to think there is. Bevo gets all the spotlight, but Hook ‘Em is at all the games. Bevo just stands around and only makes special appearances, while Hook ‘Em is walking around trying to entertain the crowd. One of my favorite moments working the football game this past Saturday was when I was standing near Bevo, and my handler tells me, “Make sure you don’t stay around Bevo too long. You’ll upset him.”

I get that he’s the older brother and he has his own private ranch while I’m here at school having to take classes and everything, but it would be nice to also get treated like a prince every once in a while.

Rowley: Bevo steals the spotlight in that he’s respected more, but Hook ‘Em is more interactive and in the spotlight.

DT: A past Hook ‘Em received cool points for doing the Superman dance from Soulja Boy’s “Crank That.” Have you considered adding shuffling to your list of dance moves, since that is what’s popular now?

Carmer: Hook ‘Em definitely keeps it fresh when it comes to the dance moves. Always have your phones ready, because Hook ‘Em is going to drop it low. [laughs]

Graff: Absolutely. We actually got requested to learn “South Dallas Swag,” so I’m going to have to figure out how to do that one. I do my own kind of crazy moves, but I’d also like to throw shuffling and other established dance moves in there.

Rowley: Hook ‘Em can Dougie. Dougie and the Wobble. Dancing, for Hook ‘Em, is not an issue.