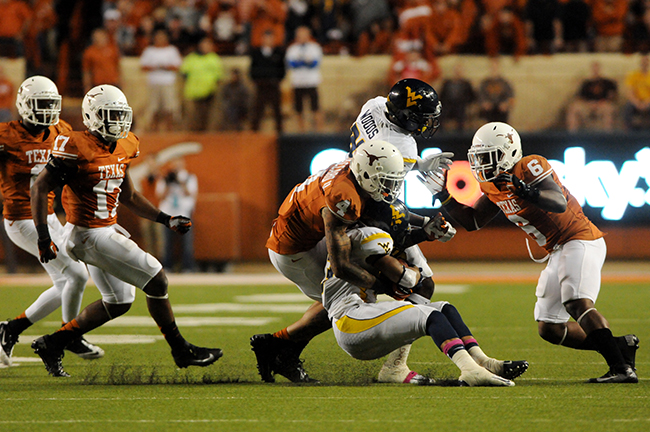 If you would have told Mack Brown before the game that Texas held Geno Smith to 268 yards, won the turnover battle and blocked a kick and a punt, he would have felt great about his team’s chances.

The Longhorns were able to do all of those things, but West Virginia’s knack of converting on fourth downs and a bungled offensive sequence in the middle of the fourth quarter led to a 48-45 Mountaineers victory.

“It’s frustrating and we left a lot on the table,” safety Kenny Vaccaro said. “[There were] a lot of plays that we could have made and a lot of possessions that we should have taken advantage of.”

Texas’ biggest opportunity of the contest came in the middle of the fourth quarter after defensive end Alex Okafor bulled his way through the line to take a huge swipe at Smith’s throwing arm, forcing a fumble that Chris Whaley was able to recover on the West Virginia 12.

At that moment, the momentum of the game had seemingly swung. The Longhorns were jumping around on the sideline, and the stands were almost swaying underneath the intensity of the crowd.

But after two short runs from Joe Bergeron, Texas was sitting at third-and-six with the play clock winding down. Ash hurried to the line to make an adjustment after the Mountaineers showed blitz, and the cadence seemed to get lost. The ball was snapped and Ash just wasn’t ready, the ball went straight through his hands and bounded behind him costing Texas 16 yards of field position.

“That was my fault,” Ash said. “I let the play clock get down so low. I just should have caught it.”

The fumble took Texas out of short field goal range and put the game on the leg of Anthony Fera, who was making his debut as a Longhorn – he missed the first three games of the season with a groin injury – after transferring from Penn State.

It was the kind of kick that Texas kickers have consistently drilled in Brown’s time in Austin – he can’t remember a time in 15 years where his kicker missed a kick with the game on the line. But from 42 yards out Ferra couldn’t convert. He pushed the ball right and left the Longhorns down by three with five minutes left to play.

“When we got the game down to seven minutes and forced the fumble I thought ‘here we go again, this has been our story.’” Brown said. “But, it’s just disappointing we didn’t finish.”

After the missed kick the Mountaineers were able to pound an exhausted Texas front seven all the way down the field, and they punched in the game winning touchdown with a minute and 12 seconds left to play. It was the type of drive that defined the night for the Texas defense. They weren’t able to stop the run — their backup running back Andrew Buie rushed for 224 yards and a pair of touchdowns — and just couldn’t get West Virginia off the field when they need to.

The defense held the Mountaineers to 3-of-12 on third downs, but Smith was just brilliant when he needed to be, leading his team to a perfect 5-of-5 conversion rate on fourth down.

“There execution on some of those fourth down throws was outstanding,” defensive coordinator Manny Diaz said. “There were some 50-50 balls on that down and distance and they all went their way.”