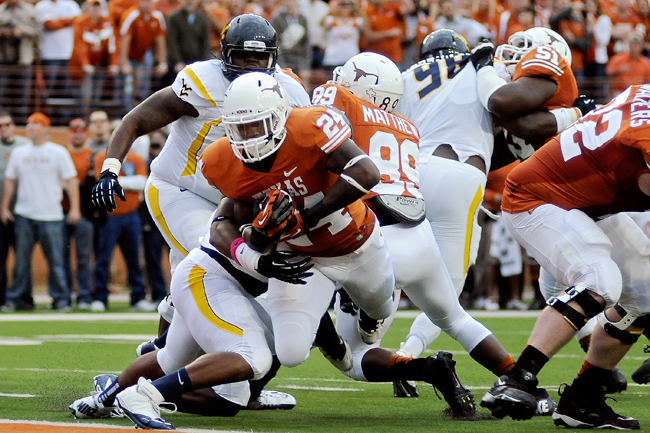 Running back Joe Bergeon ran for 45 yards and four touchdowns against West Virginia on Saturday night.

The Longhorns held Geno Smith to fewer passing yards than any team this year: 268 yards. But it wasn’t enough and once again, the run game did the Longhorns in.

Running back Andrew Buie accumulated a career-high 207 yards on 31 attempts and averaged 6.7 yards per rush.

“The thing for me that I am having trouble with is we are giving up so many rushing yards, and I’m not used to that,” head coach Mack Brown said. “We’re allowing people to be two dimensional.”

Kenny Vaccaro was surprised at the Mountaineers’ success with the run game.

“They have two great receivers and a great passing quarterback,” Vaccaro said. “The run was supposed to be eliminated, and it is disappointing to see that. The run game basically saved them.”

Some of these issues with stopping the run game can be attributed to linebacker Jordan Hicks’ absence the last two games. But, for a team that led the Big 12 in rushing defense last year, giving up more than 200 to one player won’t be good enough in this high-scoring Big 12.

When playing against Smith, a defense has to make big stops. The Longhorns failed to do that and allowed the Mountaineers to go 5-for-5 on fourth down conversions. They only went 3-for-12 on third downs.

The one time Texas did stop the Mountaineers by sacking Smith, Texas called a timeout before the play, forcing a repeat of the fouth down. Smith hit Tavon Austin for a 40-yard touchdown.

In addition, West Virginia went 7-for-7 in the red zone.

“It’s very frustrating, but a lot of their fourth downs were fourth-and-short, and those are hard to stop,” senior defensive end Alex Okafor said. “I mean, it’s frustrating, but we just have to move on from it and pick it up. We just need to make more plays on defense.”

Without Malcolm Brown, the other running backs were forced to take a bigger role in the offense.

Sophomore Joe Bergeron set a career-high four rushing touchdowns in the game and now leads the Longhorns with nine touchdowns this season. His last touchdown of the game gave Texas a 38-34 lead at the end of the third quarter.

While Johnathan Gray is still looking for his first touchdown as a Longhorn, he led the rushing attack with 87 yards on 14 carries. His 49-yard run in the second quarter put the Longhorns on the one-yard line and Bergeron came on the field and scored a touchdown.

“Every week he is getting better,” Bergeron said about Gray. “I can see it in his eyes. He has no fear. You need that in a young guy like him. Look at him on the sidelines, he’s so anxious just to get in.”

Anthony Fera finally got his chance to kick for the Longhorns. After missing the first four games of the season with a groin injury, the Penn State transfer failed to make a 41-yard field goal that would have tied the game at 41 with 5:25 left in the fourth quarter.

Granted, the attempt should have been much closer, but due to a botched snap he was moved back.

In addition to Fera’s miss, the kickoff coverage team allowed Austin a 44-yard and 67-yard return. With an offense like West Virginia’s, allowing that kind of field position was costly.

Printed on Monday, October 8, 2012 as: Defense struggles once again, WVU goes 7-for-7 in red zone