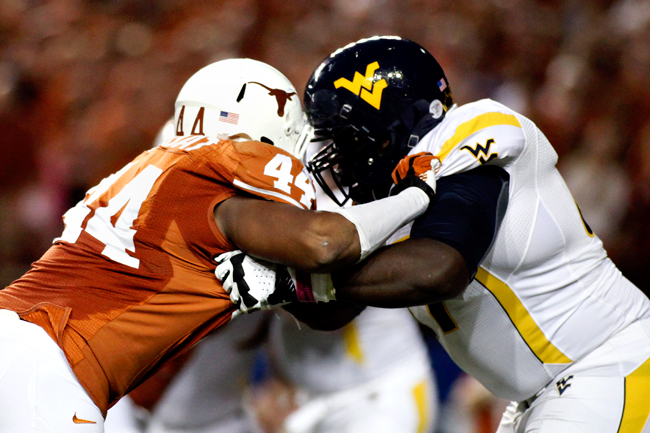 Jackson Jeffcoat  and the Texas  Longhorns have lost their past two meetings with the Sooners, but know the importance of the upcoming matchup for the momentum of their season.

The last time Texas and Oklahoma each entered the Red River Rivalry with a loss was in 2007.

Colt McCoy’s 324 yards and two touchdowns weren’t enough to rally the Longhorns to a win as they fell to the Sooners, 28-21. Texas went on to another respectable 10-win season that ended in a Holiday Bowl victory while Oklahoma won its third Big 12 title in four years.

The Longhorns, coming off a 48-45 loss to West Virginia this past weekend, have much loftier expectations for themselves than a Holiday Bowl appearance. They lost five games last year and beat Cal in the Holiday Bowl. Been there, done that. Texas has BCS bowl aspirations and the talent to turn that dream into a reality.

But that won’t happen unless the Longhorns — two-point underdogs in their next game — take down the Sooners on Saturday.

While Texas isn’t quite ready to label this weekend’s game a “must-win” game, it recognizes that the stakes are higher because it’s already suffered a loss.

“I think every game’s a must-win game,” junior guard Mason Walters said. “It’s tough we didn’t get it done last week but we can’t let one week beat us twice. The next game’s always the most important. OU’s on the schedule this week.”

To reach a BCS bowl this year, the Longhorns may not have to win their conference. There’s a good chance the Big 12 will send its champion to the Fiesta Bowl and another squad to another BCS bowl as an at-large.

But for Texas to contend for that conference championship and earn a spot in a BCS bowl, it needs a win over Oklahoma this Saturday afternoon at the Cotton Bowl.

“I can’t predict who will win out and who will lose out in the end, but it’s definitely important in the end,” sophomore quarterback David Ash said of this week’s game against Oklahoma. “One thing about this game is that records don’t matter. It’s an intense rivalry, a lot of players know each other. A lot of players are from around here. There’s nothing quite like it … To be able to be the best, you have to beat the best. That’s what we’re trying to do.”

In the other six seasons, Texas made four BCS bowl appearances — including two in a national title game — and went 67-11 (.859) over that span.

“Both of us have losses,” sophomore cornerback Quandre Diggs said. “It raises the stakes, of course, you don’t want to get the second loss. You want to go out and be successful. You don’t ever want to lose anyway.”