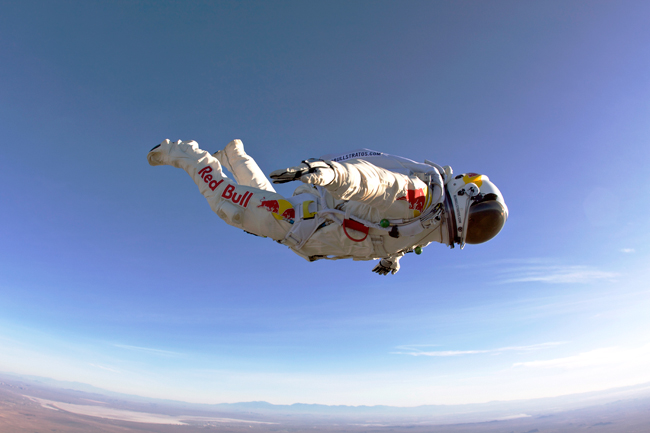 His planned 23-mile dive from the stratosphere should provide scientists with valuable information for next-generation spacesuits and techniques that could help astronauts survive accidents.

Jumping from more than three times the height of the average cruising altitude for jetliners, Baumgartner hopes to become the first person to break the sound barrier outside of an airplane.

His team has calculated that to be 690 mph based on the altitude of his dive.

His medical director Dr. Jonathan Clark, a NASA space shuttle crew surgeon who lost his wife, Laurel Clark, in the 2003 Columbia accident, says no one knows what happens to a body when it breaks the sound barrier.

“That is really the scientific essence of this mission,” said Clark, who is dedicated to improving astronauts’ chances of survival in a high-altitude disaster.

Clark told reporters Monday he expects Baumgartner’s pressurized spacesuit to protect him. If all goes well and he survives the death-defying jump, NASA could certify a new generation of spacesuits for protecting astronauts, and provide an escape option, from spacecraft at 120,000 feet.

Currently, spacesuits are certified to protect astronauts to 100,000 feet, the level reached by Joe Kittinger in 1960 when he set the current free-fall record by jumping from an open gondola 19.5 miles high. Kittinger’s speed of 614 mph was just shy of breaking the sound barrier at that altitude.

But whether Baumgartner, a 43-year-old Austrian military parachutist and extreme athlete, can attempt the jump depends on New Mexico’s often unpredictable weather.

Winds from a cold front already delayed the jump by a day. Even the Albuquerque International Balloon Fiesta, 200 miles to the north, was forced to delay its mass ascension of more than 500 balloons over the weekend. Baumgartner’s jump can only be made if ground winds are less than 2 mph.

Midday Monday, the team remained optimistic for liftoff. The best window for the week was Tuesday and Wednesday, before another front is expected to move in.

Baumgartner is to be lifted into the stratosphere beginning around 7 a.m. MDT by a helium balloon that will stretch 55 stories high. Once he reaches his target altitude, he will open the hatch of his capsule and make a gentle, bunny-style hop.

Any contact with the capsule on his exit could tear the pressurized suit. A rip could expose him to a lack of oxygen and temperatures as low as minus 70 degrees. It could cause potentially lethal bubbles to form in his bodily fluids, a condition known as “boiling blood.” There are also risks he could spin out of control, causing other risky problems.

Despite the hazards of the dive, he and his team of experts say they have confidence in their built-in solutions and have a plan for almost every contingency. The spacesuit and capsule were tested in two early skydiving practice runs, one from 15 miles up in March and 18 miles in July.

Baumgartner, who has made more than 2,500 jumps from planes, helicopters, landmarks and skyscrapers, has been preparing for this leap for five years.

After 25 years of skydiving, Baumgartner promises this jump will be his last.

He says he plans to settle down with his girlfriend and fly helicopters on mountain rescue and firefighting missions in the U.S. and Austria.