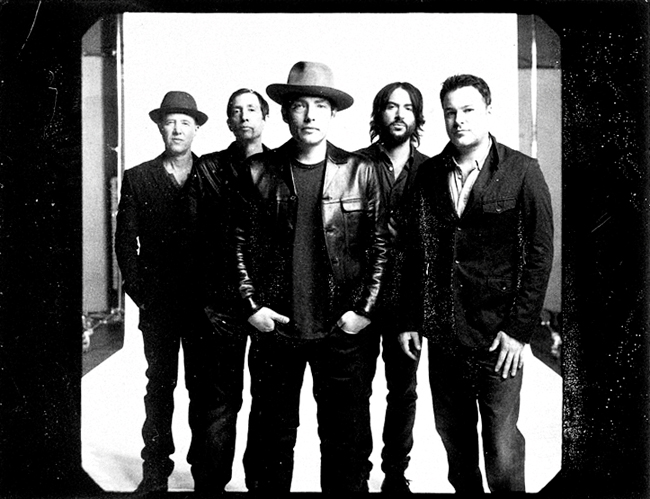 Jakob Dylan and his band reunited after seven years (Photo courtesy of The Wallflowers).

In many ways, Jakob Dylan is one of the most underappreciated artists in rock today. Over the last two decades, the 42-year-old singer/songwriter has been both highly prolific and highly consistent, releasing two solo albums and six with his band The Wallflowers.

Yet despite all that productivity, Dylan remains most widely recognized as the son of one of rock’s all-time greatest artists. His father is Bob Dylan, and while this has certainly opened some doors for him along the way, it has also created a stigma that has made it difficult for the younger Dylan to be appreciated and recognized for his own merits.

After a seven-year break from The Wallflowers during which he embarked on an acoustic-based solo career, Dylan returned to the rock band format with Glad All Over, released Tuesday by Columbia Records.

The album opens with the electro-charged one-two punch of “Hospital for Sinners” and “Misfits and Lovers,” two danceable rock songs with a Rolling Stones’ “Some Girls” party vibe. Lead single “Reboot the Mission” grooves into this category as well. Irons lays down the foundation with a pulsating funk/soul beat, giving a slight nod to the Clash’s “Guns of Brixton” (the song also features a guest appearance by former Clash guitarist Mick Jones) while Dylan croons in his breathy baritone over surging electric guitars. The song’s video features several extended pop-n-lock sequences, undoubtedly a first in the illustrious Dylan chronology.

Other standout tracks include the Wilco/Pete Yorn-tinged “Love Is a Country,” the organ-soaked “It Won’t Be Long (‘Till We’re Not Wrong)” and the cryptic, slightly Radiohead-esque “Constellation Blues.” There are no obvious instant classics quite on par with previous hits such as “One Headlight” or “6th Avenue Heartache,” although “Reboot the Mission” and “Misfits and Lovers” both come pretty close. Nonetheless, the album is a good continuation of the band’s sound as it simultaneously reaches into unexplored territory.

Dylan’s lyrics are thoughtful and literate, although they don’t always hit their mark. At his best, his songwriting can be astute and observant, as when he sings, “Love is a country better crossed when you’re young.”

Fans of 1996 breakthrough album Bringing Down the Horse will find a lot to like about the new release, which carries a lot of the same earth-toned roots-rock feel. While Dylan’s two stripped-down Tom Waits-inspired solo releases met with critical acclaim, he has stated that he prefers working with a band and being part of a unit. Everyone in Glad All Over sounds like they’re having fun and that can make all the difference when creating an album. The result is Dylan’s eighth quality album as a lead-singer/songwriter since 1992, something any musician would be proud of.

Printed on Tuesday, October 9, 2012 as: Wallflowers return to spotlight