Longhorns use last year’s loss to Sooners as motivation 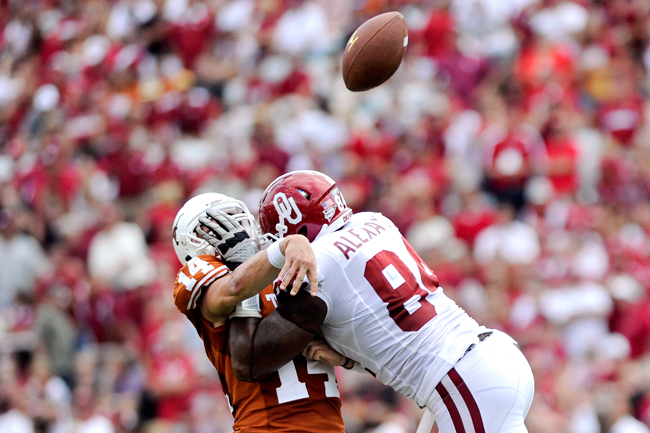 Texas’ loss to Oklahoma last year was one of those losses that just never seemed to go away.

It wasn’t just another loss. It was clear-cut proof that the Longhorns were nowhere near being back in the national picture.

But that was last year and the Longhorns aren’t dwelling on the past. Instead, they’re learning from it.

“Last year everything was new to us,” junior offensive lineman Trey Hopkins said. “The defense might have picked it up a little quicker than the offense did but now that the basics are learned it’s more of just who can pick up the fine points of the offense and the defense the quickest.”

Oklahoma quarterback Landry Jones had no problem handling the Longhorns’ defense last year. Jones went 31-for-52 for 367 yards and four touchdowns on the way to the Sooners’ 55-17 win.

The OU defense scored three touchdowns in the mauling. That’s one more touchdown than the entire Texas offense scored.

This year’s Oklahoma defense will be the toughest defense the Longhorns have faced so far this season. But, this also isn’t the same Texas offense as last year.

“We were growing as a team,” quarterback David Ash said. “We were still improving, and we were still young. We learned a lot, but I think this year it’s a whole new season, two new teams, and again, it’s going to be about preparation and execution.”

While splitting quarterback duties against Oklahoma, Case McCoy fumbled the ball twice and Ash threw two interceptions, including one that was returned for a 55-yard touchdown. Now, Ash is the clear starting quarterback and has been consistent so far this season with only one interception.

Back then, he was just a freshman playing in his fifth collegiate game and sharing the starting spot with McCoy.

The Longhorns attribute the blowout loss to many things, with inexperience noted as a big factor.

Though the Longhorns are a year older, overall the team is still young. The atmosphere inside the Cotton Bowl can be quite overwhelming for freshmen.

Hopkins remembers being shocked when he walked onto the field at the Cotton Bowl for the first time. He and the other team leaders, especially on defense, will look to help the younger players prepare for the rivalry.

“It’s not a distraction anymore because pretty much everyone except for the freshmen knows what it’s going to be like,” Hopkins said. “You don’t really know what the environment is going to be like. You’ve heard things, you’ve seen it on TV, but it’s always different.”

The Longhorns subscribe to a 24-hour rule, meaning the players can only dwell on their previous game for 24 hours and then they need to move on to the next game.

But the Oklahoma game last year was a different kind of loss and Walters has used it as a motivator. He said losing by such a large margin can hurt a team’s pride, but he and the Longhorns are not the same team they were last year and are using the loss to motivate them.

There are some losses that can’t be forgotten. Ash said he hadn’t experienced a loss like the one against Oklahoma last year since his sophomore year of high school.

After losing to Oklahoma two years in a row, the Longhorns will need a big win Saturday to redeem themselves.