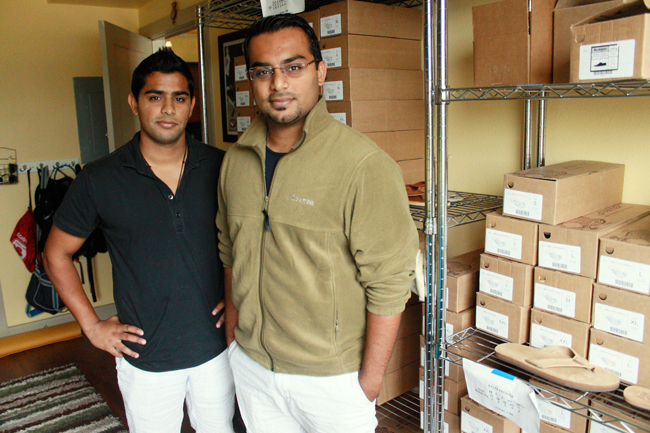 Brothers Farhad Rizvi, left, and RTF graduate Hammad Rizvi, right, share a room, both with each other and their inventory of shoes. The two are running Shamak, an Arabic-style sandalcompany, of which the proceeds help educate children in South Asia.

A duo of brothers is bringing stylish, Arabic-style sandals to America while raising money for education in South Asia.

Radio-Television-Film graduate student Hammad Rizvi and his brother, University of Texas at Dallas alumnus Farhad Rizvi, are the co-founders and creators of the company Shamak. The two sell Arabic-style sandals that are made and imported from Pakistan. Proceeds from the sandal sales provide supplies and schooling costs for children in South Asia.

“I think people really like the idea of buying something cool and giving back at the same time,” Farhad Rizvi said.

The sandals’ prices range from $65 to $78. At checkout customers choose whether they want a portion of the price to go toward funding a textbook, a uniform or a need-based scholarship.

Shamaksandals.com launched online Sept. 18, and Hammad Rizvi said they sold 500 pairs of sandals in the first week, emptying their inventory.

“I thought that once we started, it would be just friends buying,” Hammad Rizvi said. “But out of all the sales that we’ve had, it’s a lot of people who we don’t even know. To me it has been somewhat of a shocker.”

Farhad Rizvi said they had been advertising the sandals with Facebook advertisements and word-of-mouth through friends and family.

Farhad Rizvi said he initially had the idea for the company in 2010, his junior year at UT-Dallas.

“We grew up some in the Middle East, and whenever we came back home to Texas, friends would tell us our sandals were unique, and they wanted to know where they could get some,” Farhad Rizvi said. “I realized this could be a profitable product, but I did not want to just create a sandal company. I wanted to find a way to give back.”

He said he went to his brother, who is a filmmaker, to ask for help.

“I showed him the logo I had made, and he was like ‘No. That’s not going to work,’” Farhad Rizvi said.

Since then the two have been working on the project together. Farhad Rizvi, who used to work for Facebook, has dealt with sales and advertising. Hammad Rizvi has created videos and marketed Shamak.

“As this continues to grow, hopefully this will have a ripple effect,” Hammad Rizvi said. “People are really excited about this and what this does for kids.”

Farhad Rizvi said he hopes the company can grow to sell more than just sandals.

“Right now we’re just a shoe company, but I’d like to see us expand to a fashion company that has shirts, bags and stuff like that,” Farhad Rizvi said. “If we’re able to grow so big that we can build schools in different parts of the world, that’d be incredible. That’s been my vision since day one.”