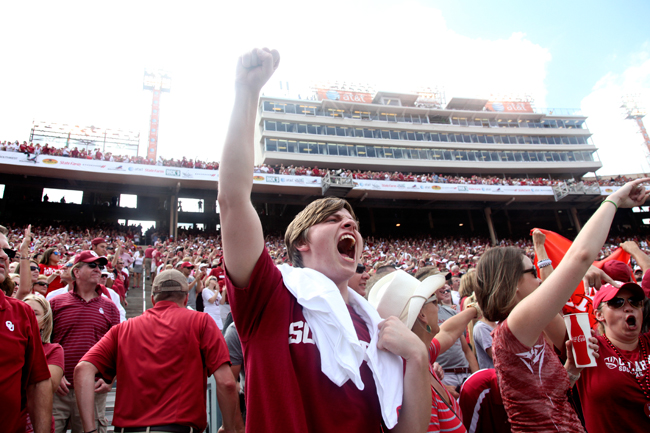 Oklahoma fans have enjoyed the successes of quarterback Landry Jones for the past few years. This weekend Jones has a chance to become just the third quarterback in Sooner history to defeat Texas in three consecutive seasons (Daily Texan file photo).

It’s that time of year again. Time for fried butter, fried beer, fried cookie dough and well, fried everything, but most importantly, it’s time for the Red River Rivalry.  After last year, Texas fans are itching to get back to the Cotton Bowl and erase the 55-17 embarrassment of last season.

Both No. 15 Texas and No. 13 Oklahoma take the field on Saturday with one loss on their record. Last weekend, Oklahoma dominated Texas Tech, 41-20, on the road to avenge a rare home loss to Kansas State two weeks prior. The Sooners are 3-1 on the season and is tied for second in the Big 12 with a 1-1 record.

“It’s a lot of fun for us. It’s one of the reasons you come to Oklahoma, to play against Texas, to play at a neutral site, to play in a huge game,” OU wide receiver Kenny Stills said. “It’s a big week for us and we’re excited and we’re going to have fun this weekend.”

This will be the 107th meeting of the rivalry and Oklahoma is looking for starting quarterback Landry Jones to make history this weekend when the two teams take the field. If the Sooners win, Jones will become only the third quarterback from Oklahoma to defeat Texas three times in a row. Former Sooner quarterbacks Steve Davis and Jimmy Harris are the only men to have done it before.

“It would be a big honor just to be in that category and in that talk,” Jones said of making history. “I’ve played at this place a long time now and I just have had a really successful career … [Davis] just really wanted to encourage me to keep going and keep leading those guys and keep fighting regardless of what happens.”

Not only that, but with a Sooner victory, Jones will take the lead in Oklahoma record books with 33 wins, passing former quarterback Steve Davis as the all-time winningest quarterback in Sooner history. To make matters worse, only one Texas quarterback has won more than two straight Red River Rivalry games. Peter Gardere defeated Oklahoma four times in the early 1990s. So, more is at stake than simply a decent bowl game.

The rivalry dates back to 1900 with Texas leading 59-42-5. With Texas A&M gone to the SEC, Oklahoma remains as Texas’ oldest rivalry still being played.

“There’s a lot of emotion that goes into the game,” Jones said of the rivalry. “I think, because there is so much tradition playing in a neutral location.”

Despite his terrible showing against Kansas State, Jones has been an efficient leader for the Oklahoma offense. He has a 63.3 completion percentage with 1032 yards in the air and seven touchdowns. Jones has been one dimensional so far this season, however. On the ground he has a net -50 yards on the season, a statistic that is sure to make the Texas defense rest a little easier after last Saturday.

In addition, only one Sooner running back has hit at least 100 yards in a game — junior Damien Williams who logged 104 yards in their season opener against UTEP. Also, the Sooners are completing 48 percent of their third downs while only attempting, and completing, one fourth down.

Their defense is typical of a Big 12 defense, so a shootout is once again expected. So far this season, the Oklahoma defense has given up 142.5 yards per game on the ground and 160.5 yards per game in the air.

However, Oklahoma has played one fewer games than Texas has, the only legitimate contest coming against Kansas State.

“They really do both (run and pass),” head coach Bob Stoops said of preparing a defense for Texas. “With another year in the season … I think not just Ash, but all of them feel more comfortable.”