Texas in search of redemption after close loss 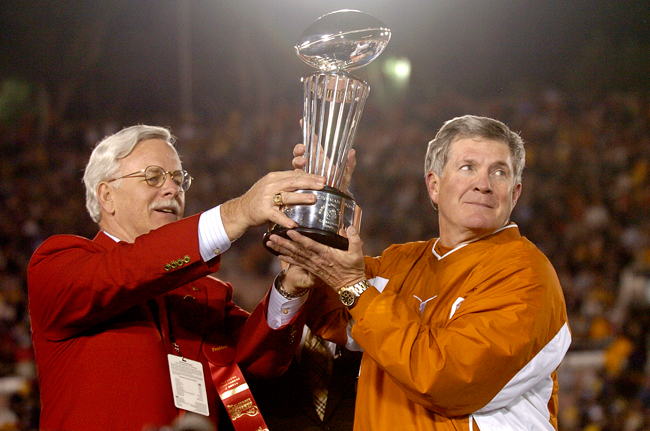 Last Saturday, Texas saw a game that it very well could have won slip away. In the process, Texas missed its opportunity to take a step and rejoin the nation’s elite teams, a group West Virginia has been a part of since Pat White won his first BCS game against Georgia in 2005.

Almost eight years ago to the day, Texas had just lost its fifth straight game to Oklahoma and was shut out for the first time in decades. Texas was ranked in the top five before that game, but still wasn’t really considered a great team. Mack Brown couldn’t seem win the big game. Texas was too soft. It wasn’t tough, like Bob Stoop’s Oklahoma teams which beat Texas five seasons in a row, from 2000-2004.

That reputation had stuck around the program for years and the Longhorns could not seem to shake it. Mack Brown had pleaded for his team to be given a chance. He wasn’t above politicking if it meant that his team would get a shot at a BCS game, instead of getting stuck in the Holiday Bowl again. Brown thought Texas deserved a chance to change its reputation.

When the final BCS rankings were released in 2004, Texas had jumped California by a fraction of a point to be guaranteed a BCS game. In doing so, Texas crashed an exclusive party. Not just the Rose Bowl, that lost its Pac 10/Big Ten matchup when the Longhorns passed the Golden Bears, but the BCS was where only the elite could tread. It was sacred ground. Only the teams that were most worthy and deserving could be in a BCS game and Texas had essentially talked its way in.

On New Year’s Day 2005, Brown and his Longhorns got a chance to prove that they were indeed among the country’s elite. And they didn’t disappoint. The legend of Vince Young blossomed on that day, and Dusty Mangum’s wobbly, partially blocked field goal to beat Michigan changed the entire fate of the Texas program.

It was ranked preseason No. 2 at the beginning of the next season on the way to winning the program’s first National Championship in 35 years. Texas wasn’t soft anymore. It was strong, finally considered elite. Brown was an superb coach and not just “Coach February.”

Now, eight years later, Texas is in need of another reputation change.

Forgotten are the nine consecutive ten win seasons. Memories don’t go back that far. It’s a “what have you done for me lately” world, and lately, Texas hasn’t done much. Thirteen wins and 12 losses over the 2010 and 2011 seaons and a 2-7 home conference record over those two seasons is an effective way of changing a reputation that had been forged and held for five seasons.

Now the Longhorns are just another team that can’t stand with the big boys. Teams like West Virginia can walk into incredibly hostile environments, take the best shot that the opposing team has, and always have a little more.

Is West Virginia an elite team? On offense, yes. It remains to be seen if the defense deserves to be mentioned at the same level. But even if the team as a whole is not considered elite, it sure can put together an elite performance. Texas countered with a good performance, some might even say that it was even a great performance, but it was not elite.

Texas is back to its 2004 form. That’s not necessarily a bad thing, either. Those teams rolled out of bed and won 10 games. But they couldn’t win the big games. They couldn’t beat elite teams, so the national perception said. But that team, led by Vince Young, Cedric Benson and Michael Huff changed the fate. The Longhorns beat four ranked teams to close out the season. And when finally given the opportunity in a BCS game, beat the champions from the Big Ten.

This Red River Shootout is a big game, even if the records might not indicate it. With both Texas and Oklahoma having a loss, the loser of this game is virtually eliminated from the Big 12 Championship discussion. And the Sooners aren’t exactly rolling at this stage in the year either. There are questions around Bob Stoops’ program. The loser of this game suffers a major setback. The winner could potentially right the proverbial ship.

With another big game against Kansas State to close this season, Texas has two more chances to return to the nationally elite after blowing its first opportunity. If it can manage wins in those games, Texas may very well turn into an elite team when the season ends. History repeats itself and Mack Brown has another chance to declare his program as one of the best of the country. It’s not there yet, but like that 2004 team, it’s close, and it has a chance to prove it.