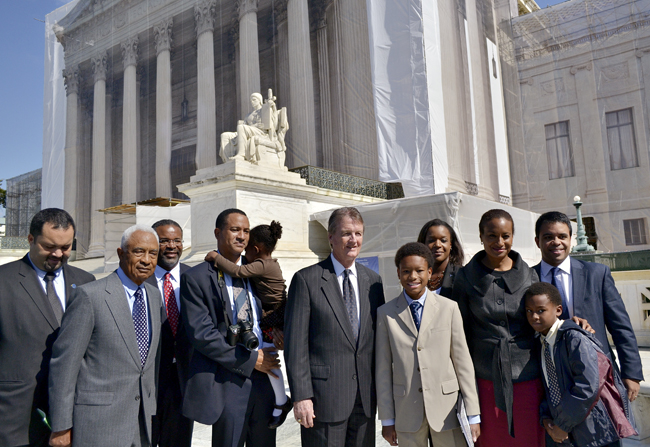 President William Powers Jr. stands in front of the the United States Supreme Court building with the family of Heman Sweatt. After successfully winning a lawsuit against the University in 1950, Sweatt became the first black law student to attend the University of Texas. His case would form the basis for Brown v. Board of Education for years later. " />

President William Powers Jr. stands in front of the the United States Supreme Court building with the family of Heman Sweatt. After successfully winning a lawsuit against the University in 1950, Sweatt became the first black law student to attend the University of Texas. His case would form the basis for Brown v. Board of Education for years later.

WASHINGTON – The Supreme Court pressured UT to justify its use of race in admissions Wednesday as the justices picked apart the meaning of racial diversity in court.

Arguments in Fisher v. Texas centered on whether UT’s use of race creates essential and meaningful diversity on campus. Supporters of affirmative action, including civil rights leader the Rev. Jesse Jackson and the Rev. Al Sharpton, convened in the capital to show support for UT’s position during the proceedings.

The hearing kicked off the last stretch of the legal saga of Abigail Fisher, now a graduate of Louisiana State University. UT rejected Fisher in 2008 and she later sued the University, claiming her right to equal protection was violated because race was a factor in her application.

Fisher attended the hearing and issued a brief statement supporting her case when arguments concluded. A decision on the case is expected sometime next year.

Bert Rein, Fisher’s counsel, said he did not intend to challenge the current precedent that race may be used to further diversity — a position affirmed in the court’s decision in Grutter v. Bollinger in 2003.

Instead, Rein said he intended to challenge Grutter’s “unlimited mandate” to use race classifications that discriminate against some applicants without creating measurable diversity.

“What we are concerned about is universities like UT that have read [Grutter] to be a green light to use race with no discernible target — critical mass,” Rein said.

Answering questions from Justice Anthony Kennedy, who may be the swing vote in this case, Rein said UT did not pursue race-neutral alternatives that would have furthered diversity.

Kennedy took aim at this point in his dissent in Grutter and said diversity goals could be achieved through race-neutral methods.

“Race should have been a last resort and it was a first resort,” Rein said.

Justice Sonia Sotomayor said Rein was attempting to “gut Grutter.” By requiring UT and other universities to set specific targets for admissions, colleges would make their own policies unconstitutional, she said.

“Boy, it sounds awfully like a quota to me, which Grutter said you should not be doing,” Sotomayor said. “[Grutter said] instead you should be setting an individualized assessment of the applicants.”

UT factors an applicant’s race into admissions decisions for students not automatically admitted based on high school class rank. UT admits close to one-quarter of its students under its race-conscious holistic review process.

Gregory Garre, UT’s counsel, said UT’s data shows the University met legal precedents set under Grutter because the University’s race-conscious admissions benefit all groups and do not set any sort of target.

Garre said there was no way to quantify a critical mass of students from a particular group.

“I think the standard you would apply is to look to whether or not the University reached an environment in which members of underrepresented minorities do not feel like spokespersons for their race, an environment where the benefits are realized,” Garre said.

Garre also said UT did not rank students in ways where race could be a “tie-breaker” between two applicants, but Justice Samuel Alito questioned the feasibility of his comment.

Justice Antonin Scalia was critical of UT’s admissions records — especially reports showing that the majority of race-conscious admits came from households with incomes above $50,000.

“Does the United States agree with Mr. Garre that African-American and Hispanic applicants from privileged backgrounds deserve a preference?” Scalia said when questioning Solicitor General Donald Verrilli, who spoke on behalf of the United States government in support of UT.

“[UT] will look for individuals who will play against racial stereotypes just by what they bring,” Verrilli said. “The African-American fencer, the Hispanic who has mastered classical Greek.”

Verrilli also stated the opinion of the United States government that educational diversity is necessary to prepare soldiers and government officials for the diverse work environment they encounter after college.

Chief Justice John Roberts expressed concern about the amount of faith the court would need to place in UT’s claim that its policy is being used effectively without any numerical analysis.

“The compelling interest you identify is attaining a critical mass of minority students at the University of Texas, but you won’t tell me what the critical mass is,” Roberts said.

On the steps in front of the court, representatives from several UT student groups strove to place their own mark on the arguments cut in the courtroom. Those in attendance included Bradley Poole, president of the Black Student Alliance, and Joshua Tang, coordinator of a student campaign to support UT’s admissions policy.