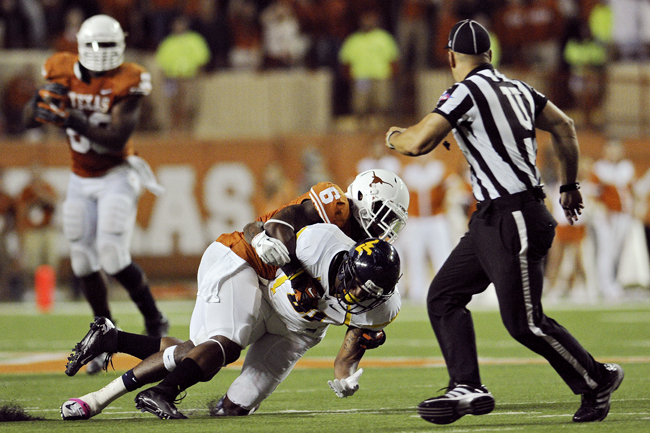 Cornerback Quandre Diggs makes a tackle during last week’s West Virginia game. After battling the high-scoring Mountaineers, the Longhorns will face off against Oklahoma’s hot offense. " />

Cornerback Quandre Diggs makes a tackle during last week’s West Virginia game. After battling the high-scoring Mountaineers, the Longhorns will face off against Oklahoma’s hot offense.

First Texas took on Oklahoma State, the top-ranked offense in the country. Then the Longhorns had the challenge of dealing with Heisman Trophy frontrunner Geno Smith and West Virginia’s 52-point-a-game attack.

Now they face Oklahoma and Landry Jones. Some break, huh?

The Sooners come into the Red River Rivalry averaging 38.3 points a game. With a senior leader like Jones at the helm, they’re always capable of more.

Oklahoma is hot, too. Its offense put up 41 points against Texas Tech last Saturday, impressive given Tech’s defense entered the contest as the top ranked unit in the country.

It will be a challenge for the Longhorns to contain such a high-powered balanced attack, but the players insist that their experiences over the past two weeks have helped them prepare for what they will face in Dallas.

“Oklahoma State, West Virginia, along with Baylor are all very similar,” cornerback Carrington Byndom said. “They all run the same type of offenses, so we kind of have a little bit of experience under our belt by playing those other two teams, Oklahoma State and West Virginia.”

In last year’s Red River Rivalry, a young Longhorns team was plastered by the Sooners, 55-17.

There wasn’t much that went right that day for Texas. The team featured two different quarterbacks, turned the ball over five times and allowed 453 yards of offense.
It was a game many of the players would like to forget, but the final score has served as excellent motivation for
the team.

“It motivates us a lot,” cornerback Quandre Diggs said. “I still remember very clearly, it wasn’t a good day for us. But we have another chance this Saturday to go out and be prepared. We have guys that have played way more games than they played last year at this time.”

It was in last year’s game at the Cotton Bowl that David Ash had one of his lowest moments as a Longhorn. He had three turnovers — two picks and a fumble — while throwing for 107 yards on 20 attempts and looking completely overwhelmed by the magnitude of the stage.

Through five games this season he has thrown for 1,276 yards, 11 touchdowns and only one interception. He led the Longhorns on a game-winning drive at Oklahoma State in front of a hostile crowd and features the second-best quarterback rating in the nation.

Ash’s demeanor hasn’t changed much. He’s still the same calm, stone-faced presence, but his skills on the field have
transformed completely.

“They’re the same person, but then again, they’re not the same football player,” offensive guard Mason Walters said. “From last year to this year, he’s probably spent more time preparing, understanding the offense, understanding  the importance of his role.”

One of the most unique parts of the Red River Rivalry game is that it takes place at a neutral site, the Cotton Bowl, with the 92,000 fans split evenly down the middle between burnt orange and crimson.

It’s an experience independent to this historic rivalry. Hearing the fans on both sides is almost comical for some of the players.