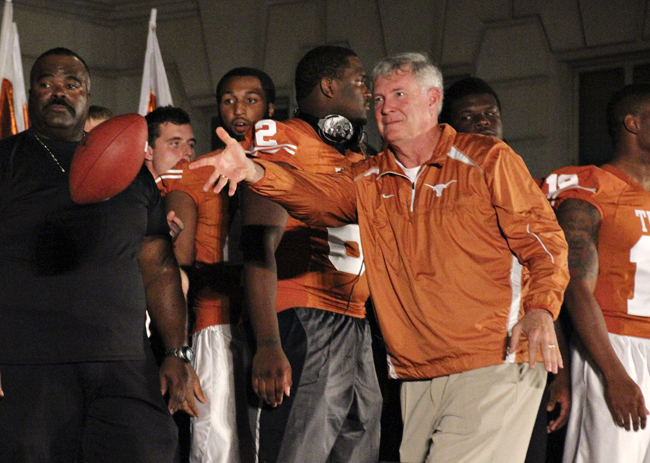 Mack Brown, head coach of the Texas Longhorn football team, tosses the official game ball to a member of the Navy ROTC at Wednesday night’s torchlight rally. As is tradition, the Texas Navy ROTC will then carry the ball 200 miles to Dallas, where they will then play the OU Navy ROTC team in their annual football game.

Every year the Naval ROTC battalions from UT and OU run the game balls for the Red River Rivalry game to Dallas. When the two batallions meet in the middle, they hold their own rivalry football game.

“The tradition allows every midshipman in our unit to come together and carry out a highly challenging yet highly rewarding event,” said Rene Perez, a UT NROTC officer candidate.

The 86-member UT battalion began the first leg of the 200-mile trek to Dallas on Monday, alternating groups of runners until the entire group reaches Dallas the Thursday before the game.

“This tradition also reminds us that we as a student organization are an integral part of the University of Texas,” Perez said. “We execute this tradition with great pride.”
Thomas Shirley, UT NROTC battalion commanding officer, caught the ball this year at the Torchlight Parade.

“It is a great honor and privilege to be representing the Naval ROTC battalion,” Shirley said. “I am excited for getting the opportunity to catch the ball from Mack Brown.”

Before Shirley caught the ball, he addressed the crowd to explain the run and tell students about another tradition.

“We have a record of 8 and 2 against the Sooners,” Shirley said. “We are hungry for a ninth win.”

The outcome from the last two Red River Rivalry meetings has been a loss for both the UT NROTC and the Longhorn football teams. Kickoff for the NROTC game is Friday at 1 p.m. at Glencoe Park in Dallas.

Printed on Thursday, October 11, 2012 as: Naval ROTC treks on foot for rivalry game against OU