University Lands sales down from record highs in 2011 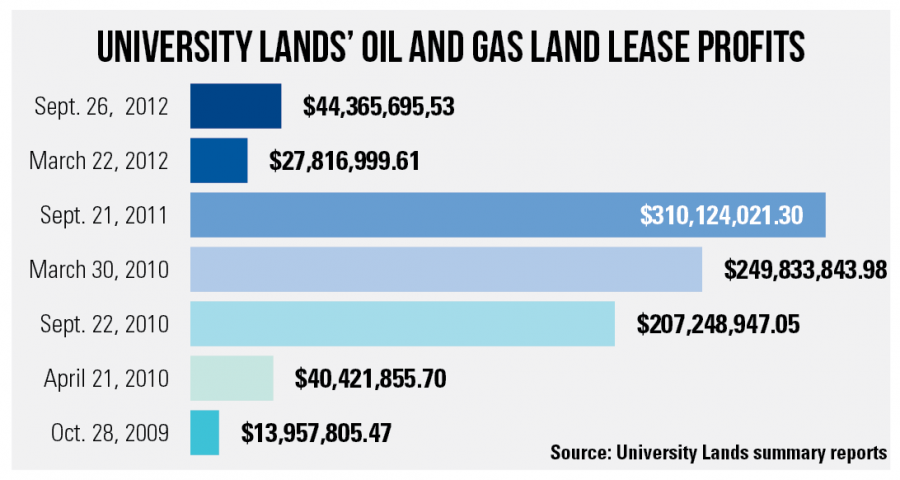 University Lands, operated through the UT System’s Office of Business Affairs, sold a combined $72 million in oil and gas leases during its 2012 semiannual sales.

The leases come on the heels of University Lands’ most lucrative sales in history in 2011, when lease sales totaled $560 million.

The September 2012 sale offered 49,007 acres, just a little more than an eighth of the September 2011 sale when University Lands offered 372,163 acres for lease to oil and gas companies.

University Lands is responsible for the 2.1 million acres of land that make up the Permanent University Fund, a state endowment funded by the investment of lease sale profits and revenue from production on the land. The land is leased for multiple purposes, including oil and gas production and for surface uses.

The UT System and the Texas A&M University System are beneficiaries of the PUF.

The UT Investment Management Company invests sale profits and lease revenue in various industries including oil, gas and gold on behalf of the System. Returns on investment go straight into the Available University Fund, which usually makes up about 8 percent of UT’s operating budget.

The University received $205 million in returns through the Available University Fund for the 2012 fiscal year operating budget — up almost $26 million from 2011.

Mary Knight, associate vice president and UT budget director, said fluctuations in lease sale profits are smoothed over time because Available University Fund estimates are based on 12 previous financial quarters rather than only the previous year.

“Long-term declines could have a major impact on the recurring budget and could require budget reductions across all colleges, schools and departments, including research and student scholarships,” she said.

Bruce Zimmerman, CEO of the UT Investment Management Company, said the company is not looking to invest in new industries.

The bulk of revenue generated from the lands is from oil production, Benson said. University Lands receives 25 percent of royalties from all oil and gas production on its leased land and produced almost $1 billion in revenue last year. He said $600 million was from oil and gas.

“While it’s kind of exciting to see big oil and gas lease sales, the real revenue comes from long-term production on the land,” Benson said. “Of all these new leases companies buy, the ultimate goal is to get them to drill.”

The sale is a sealed bid process in which companies bid on land where they think they can hit oil. Permanent University Fund lands are primarily located in 24 counties, mostly in West Texas.

“We get newcomers every year, but a lot of the same companies are consistently drilling and producing on our land in the Permian Basin for years,” he said.

Oil was first discovered on Permanent University Fund land in 1923 in Reagan County, according to University Lands.