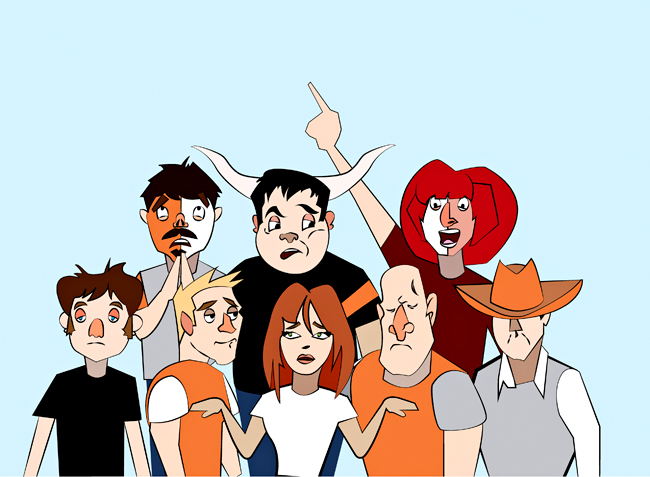 I know nothing about football. Zip, nada, zilch. I think yard lines are picket fences, the ol’ pigskin is a single stale pork rind and tackling is something you do when initiating a tickle fight. In fact, I know so little about football that I accidentally tried to pass off a bright red dress as burnt orange. I would have worn it to the stadium too had my date not nervously pointed out that the Sooners’ color was red. “Who are the Sooners?” I asked, demonstrating my impressively narrow range of football knowledge.

Upon entering the stadium and finding our seats, I was distressed to find that a single OU fan was seated next to me on the Longhorn side of the stadium. I had planned on masking my complete incomprehension by simply cheering when everyone else did. Do the wave? I’ll undulate like the ocean. Got your horns up? My pinkie and index are at attention. If you scream Texas, I’ll scream Texas! (Or is it fight?) But now, with this Sooner booming away next to me, I risked the chance of cheering when he cheered and looking like the football-ignorant dimwit I am.

Which is why I want to thank you, Longhorn football team, for making things so easy on me. I never had to figure out when to cheer, because I had to do it so few times! I have one question though — I was told OU sucks?

There were a lot of things I didn’t understand about Saturday’s game, although that might be my fault. For starters, I thought you cheered at a touchdown, not at “a fluke of a safety,” like the people seated around me called those two points. Also, I thought that when you tackle someone, you’re supposed to pin them down, not let them brush past you like they’re shuffling to the back of a crowded bus. I guess I just never realized how much football had in common with an elementary-school tag game. It’s just so hard to chase them down when they’re all so quick, isn’t it?

I think I’ve partly avoided watching football for all these years because I assumed it would be neolithic and brutal. But I learned Saturday that it doesn’t have to be that way. You guys acted like perfect gentlemen on the field; even though Oklahoma was listed as the “home team,” you treated them like your guests, and wow, were you all good hosts. Never once did you stand in their way when they felt like going for a run or waving that big ol’ flag of theirs (Hey, do we have one of those? I really think we should get one; their fans seemed really excited about it).

But despite your gentlemanly behavior, the crowd seemed upset. At one point, I looked around to see an entire family in matching burnt orange nodding sadly to themselves. It’s possible that they were just frustrated with the long line for corn dogs, but I think it was more than that. Maybe, like the gray-haired and disgruntled Longhorn behind me said in the second quarter, “Something [is] wrong.” Have you guys ever seen that Disney Channel Original movie where the whole team eats bad fish tacos before the big game? I’m just saying, maybe you should change caterers.

Printed on Tuesday, October 16, 2012 as: Amateur fan sees bright side to football fail