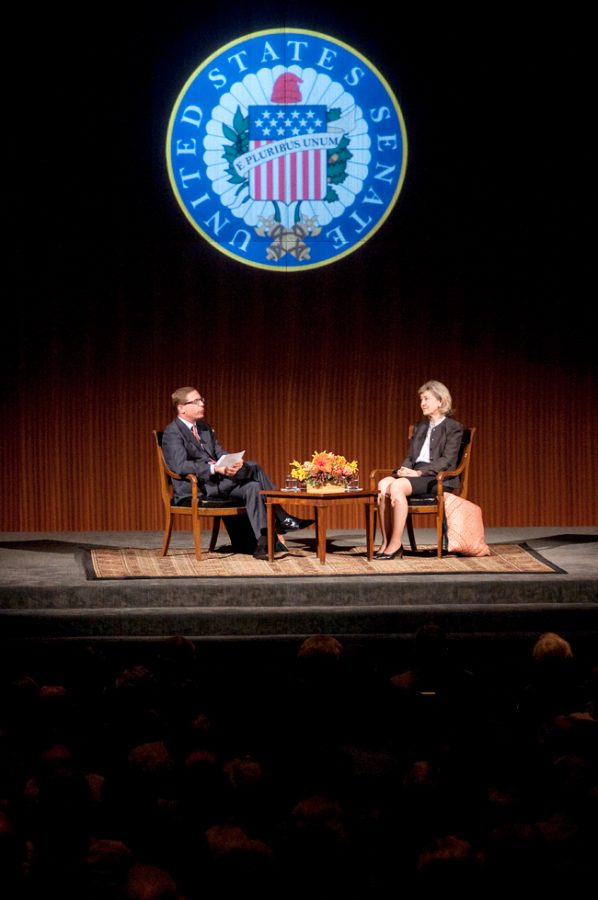 Texas Tribune CEO and editor-in-chief Evan Smith speaks with Sen. Kay Bailey Hutchison at the Lyndon B. Johnson Presidential Library Monday evening. Hutchison, a senior Republican senator and a UT alumna, stated her desire to see higher education improve in Texas in the next few years without cutting the funds for academic research.

As her 19 years in the United States Senate come to a close, Sen. Kay Bailey Hutchison reflected on a career of public service and offered her take on higher education at the LBJ Presidential Library on Monday evening.

Hutchison, the senior Republican senator from Texas and a UT alumna, participated in a discussion with Evan Smith, CEO and editor-in-chief of the Texas Tribune. On several occasions Hutchison said quality higher education is necessary for Texas to compete in the global economy. An official said 450 people attended the event.

“For Texas, I want our state to be known and respected as a high-quality academic higher education-providing state,” Hutchison said. “I think the number of major companies that move here want an educated workforce. They want the research capabilities to do public-private partnerships and have great research, and they want students who have been around great research and great programs.”

Last year, Gov. Rick Perry challenged colleges and universities to develop degrees that cost no more than $10,000. Proponents of the $10,000 degree, including the Texas Public Policy Foundation, a nonprofit conservative think tank with ties to Perry, have also questioned the efficiency of research in higher education.

At the event, Hutchison said research plays a necessary and valuable role at major universities in Texas.

“I think that any talk of devaluing research is not productive and it is hurting our image,” Hutchison said. “We need to say, ‘Look, I’m not against experimenting with 4-year, $10,000 degrees, but you don’t do it at flagships.’”

Hutchison was first elected in 1993, making her the first woman to represent Texas in the U.S. Senate. After three consecutive re-elections, Hutchison announced in 2011 that she would not seek another term. Republican candidate Ted Cruz and Democratic candidate Paul Sadler are currently running to fill Hutchison’s seat.

History junior Taylor Guerrero said she hopes Hutchison’s successor will learn from her willingness to work across party lines.

“I think the next senator should be able to work in a bipartisan manner and to represent Texas the best that they can instead of just representing a certain percentage of Texans,” Guerrero said.

Hutchison said she has no plans to seek public office again but will continue to advocate the issues that matter most to her and to the state of Texas. Hutchison said one of those issues is seeing more universities in Texas gain Tier One status, which identifies schools with significant research programs but has no concrete definition.

“California has nine, New York has seven and we have three,” Hutchison said. “That’s not enough. We need to have three more, and we need to put the money into three more.”

The crowd at the event included those not politically aligned with Hutchison.

“I decided to come out because of my interest in politics,” government senior Justin Perez said. “Even though I’m a Democrat, I think it’s important to hear what others have to say.”