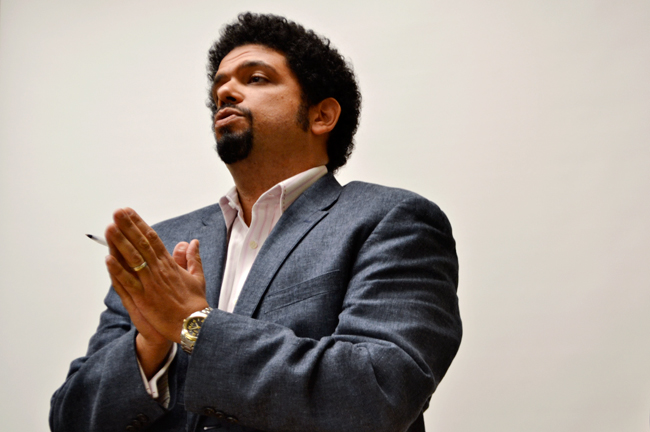 Frank Guridy, director of the John L. Warfield Center for African and African-American Studies, mediates a panel about affirmative action and the Fisher v. University of Texas case.

A panel of faculty members discussed arguments against affirmative action and contemplated the potential implications of Fisher v. University of Texas on Monday.

On Oct. 10, the U.S. Supreme Court heard oral arguments in Fisher v. University of Texas, a case filed against UT by a white student denied admission in 2008 who claimed the University’s admissions policies discriminated against her because she is not a member of an underrepresented racial group. UT states the University admits a quarter of its students through a holistic admissions process that examines academic achievements, personal achievements and special circumstances, which include ethnicity and socioeconomic status, among other factors. The University accepts 75 percent of incoming students based on high school class rank.

Juliet Hooker, associate director at the Teresa Lozano Long Institute of Latin-American Studies, said the debate surrounding affirmative action incorrectly focuses on the notion of a “critical mass” of diversity instead of solving problems of racial disparity in the educational system and workplace. She said opponents of affirmative action believe affirmative action favors race over merit as a factor in admissions.

“I think that, as a result, the beneficiaries of affirmative action are cast as people who are equally privileged as those who don’t benefit,” Hooker said.

Edmund Gordon, chair of the Department of African and African Diaspora Studies, said a critical mass would constitute a student population that accurately reflects state demographics.

“If the issue is access and opportunity, then we have not reached a critical mass,” Gordon said.

Assistant education professor Richard Reddick said if plaintiff Abigail Fisher was not admitted to UT but still wanted to attend, she could have attended another institution in the UT System and transferred to UT.

“What I fear is she actually will become a symbol of white privilege and entitlement,” Reddick said.