Tackling problems have to get fixed now, not later 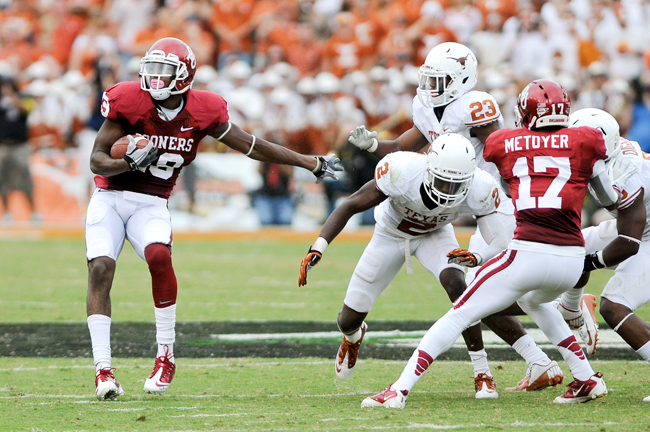 Justin Brown gets past a group of Texas defenders during a 28-yard catch in the second quarter of the longhorns' 63-21 loss to Oklahoma on Saturday. Quandre Diggs' attempt to strip Brown was unsuccessfull, while Carrington Byndom and Mykkele Thompson made futile attempts to tackle Brown on one of many long gains made by the Sooners in theis year's game.

It’s been a month since linebacker Jordan Hicks went out with a hip injury. It’s been about that long since the Longhorns have been able to tackle anybody.

Hicks, a junior, has missed the last 14 quarters of football and is questionable this week. To make matters worse, Jackson Jeffcoat was lost for the season this weekend with a pectoral injury. Texas still has Alex Okafor and Kenny Vaccaro to lead the way, but there are nine other guys on the field who have to step up and help the Longhorns fix the tackling problems that have plagued them over their last four games.

“I don’t think the young players know their role as well as they need to sometimes,” Vaccaro said. “There were three or four guys playing hard and some others that were not. It’s just causing a cancer on the team … Everyone needs to want to make the play every down. It’s not like that right now.”

Texas has allowed 178 points over its last four contests — the most over a four-game stretch in the program’s 1,223-game history. That has to change. And it starts with a Longhorns run defense that ranks 106th in the country, the worst in the Big 12.

“Right now, we have no confidence in our run defense,” Okafor said. “There’s no doubt that any team right now is capable of gashing us … We’re too careful on defense. We’re not throwing our bodies around. We’re expecting somebody else to make the play. That comes from practice. That comes from effort. We have to change that.”

“They took a base zone play and ran it 95 yards,” head coach Mack Brown said. “We had two standing there that they run by and three in the back end that can’t tackle him. That was awful, a terrible thing. We’re trying to change everything. Our young safeties need to tackle better.”

Sophomore Mykkele Thompson is one of those safeties. A quarterback in high school, Thompson has made his first two career starts the past couple of weeks, taking the spot of another struggling safety, junior Adrian Phillips, making a team-high 22 tackles over that span. But many have been made with Thompson going several yards backward and as a result of a struggling linebacking corps escorting ballcarriers to the secondary.

“I don’t really understand. I feel like tackling is something you should have learned a long time ago,” sophomore cornerback Quandre Diggs said. “This is Mykkele’s second game. I guess you guys think that everyone is just going to be All-Americans. He’s trying. He’s giving it all he’s got every weekend.”

Thompson doesn’t have to be an All-American. But he, along with others on defense like juniors Demarco Cobbs and Carrington Byndom, have to play better in the second half of this regular season, because defensive coordinator Manny Diaz, in his second year on the job, is leading a unit that is on pace to go down as the worst defense in program history.

“Our run defense was horrendous on Saturday and the responsibility for that comes to me,” Diaz said. “Why you’re not [tackling] is not because you don’t want to, it’s the opposite. You become so worried about not making the tackle that you forget the very first fundamental about missing the tackle — you have to go run and step on the ballcarrier’s toes.”

Good advice for a defense that has been caught on its heels all too often this season.

Printed on Tuesday, October 16, 2012 as: Opponents- and maybe season- slipping out of UT defense's grasp