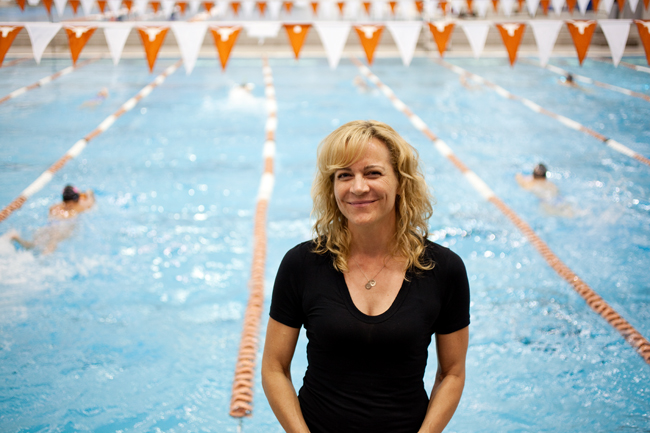 Coach Carol Capitani remembers losing to Texas when she swam at Cal.  Now, she is coaching the Longhorns in hopes that they will defeat her alma mater.

She saw the Longhorn women’s swimming and diving team win its fifth NCAA championship in a row in 1988 in front of its home crowd.

Then again in 1990. Texas’ sixth championship, and obtained at home.

But Carol Capitani was a swimmer at Cal-Berkley then, and Texas was the team to beat.

“I remember Texas winning,” Capitani said as she looked around the pool she competed in many times. “And they were dominant at the time, and we looked up to them. I mean, you always look up to the best team.”

But now Cal-Berkley is the team to beat, having won three of the last four NCAA championships, and Capitani is on the deck, this time in burnt orange as the new women’s swimming and diving coach.

“When I was approached about this job, it was special because it’s one of the places I have fond memories of competing,” Capitani said. “And at that time in my life, Texas was the team to beat. Now it’s just ironic that Cal is the team to beat.”

Capitani took over for Kim Brackin on April 20, following a ninth-place finish at the NCAA championships. Texas, once the swimming powerhouse that won seven of the first 10 national championships, has not won since Capitani’s senior season at Cal.

“Texas certainly has a good history and many championships,” Capitani said. “I want to make people proud, I want to make Longhorn nation proud and I’m doing my best to make that happen. Hopefully, I can bring wisdom and experience.”

The experience she is talking about is not just from her eight All-American years at Cal but from her days as an assistant at Villanova, her two years as an assistant for the Singapore national women’s swimming team and her 14 seasons as an associate coach at Georgia, helping them to four national championships (1999, 2000, 2001 and 2005) and seven runner-ups.

Through her experience, Capitani also knows that it takes time to win. It’s not an immediate thing.

“Sometimes it looks like we have a long way to go,” Capitani said. “But we are laying the foundations. We have to lay it brick by brick and start somewhere.”

What will it take to get back to that championship level?

“We have to have two or three great recruiting years,” Capitani said. “It’s going to take work, great kids and more work. We have to establish a great culture, similar to that of the men’s team. It’s hard being number one; otherwise everyone would be.”

But at the same time, Capitani said she realized that she still has a very competitive squad, one that she feels can win the Big 12, where they finished second last year to Texas A&M (who has moved on to the SEC).