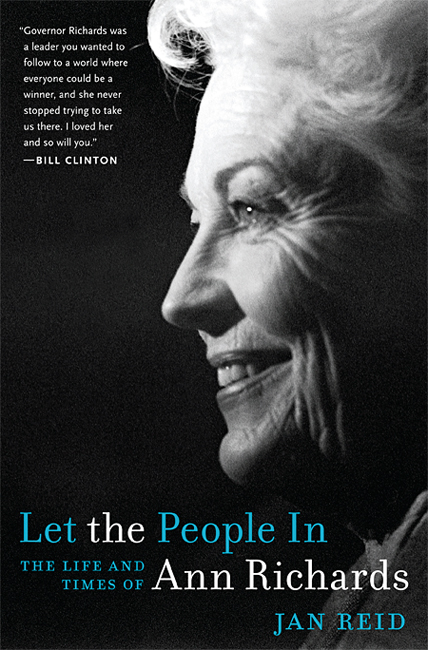 Book: “Let the People In: The Life and Times of Ann Richards”
Author: Jan Reid
Publisher: University of Texas Press

In the long, sprawling history of outsized Texas political personalities, former governor Ann Richards’ star shone as bright as any. Her irreverent wit, small-town charm and straight-shooting personality led her from the rural fields of Lakeview, Texas, to the highest office in the state, blazing a trail for countless aspiring politicians inspired by her remarkable life story.

It is a story that acclaimed Texas journalist and author Jan Reid captures poignantly in “Let the People In: the Life and Times of Ann Richards,” published earlier this month by the University of Texas Press. In the book, which Reid describes as “a biography that contains a thread of memoir,” the personal friend and one-time environmental policy advisor recounts not only the later years in which Richards entered the statewide and national political spheres but also the four-and-a-half decades of her life preceding, which turn out to be just as captivating.

Reid, whose background is mostly in music journalism, starts with the future governor’s working-class upbringing in rural North Texas. He follows her through Waco High School and Baylor University, where she starred on the debate team; then he describes her marriage and early family life with high school sweetheart David Richards.

Reid moves the story along with a steady prose that is supplemented by revelatory photographs, anecdotes from family and friends and excerpts from Richards’ own 1989 memoir, “Straight from the Heart: My Life in Politics and Other Places.” The most interesting part of “Let the People In” is when the young Richards family moves to Austin in 1969. Upon arriving, they become acquainted with many of the musicians and counter-culture figures of the era, such as Willie Nelson, Jerry Jeff Walker and writers Gary Cartwright and Bud Shrake.

It is surprising to read how closely connected these seemingly opposite ends of the cultural spectrum were in that era. In describing the scenes and episodes from the era, Reid provides us with an eloquent portrait of Austin while also documenting the confluence of politics, history and cultural studies. He peppers the story with references to many recognizable Austin landmarks, such as the Armadillo World Headquarters, the Broken Spoke, Sholz Garten and the Texas Chili Parlor, as well as an extensive list of the colorful characters who populated them.

Reid then details Richards’ big break: getting the call to deliver the keynote address at the 1988 Democratic National Convention. This introduced Richards to the nation, making her an overnight political star with her famous attack on then-president George H.W. Bush: “Poor George, he can’t help it. He was born with a silver foot in his mouth.”

The final section of “Let the People In” describes the ups and downs of Richards’ tenure as Texas’ 45th governor, from her initial successes at diversifying the office to her struggles and ultimate failure in fending off George W. Bush in her bid for re-election in 1994.

Overall the book is an engaging, informative read. In the current election cycle, this book is an excellent way to gain perspective on the changes in the political climate over the last 20 years.

Like any politician, Ann Richards was a somewhat polarizing figure, garnering many admirers and detractors alike. However, she was one of the major figures of late 20th century Texas politics, casting a highly influential shadow on subsequent generations. “Let the People In” is a definitive biography, with a story as inviting as its title suggests.

Jan Reid will be speaking and signing at BookPeople Wednesday at 7 p.m.