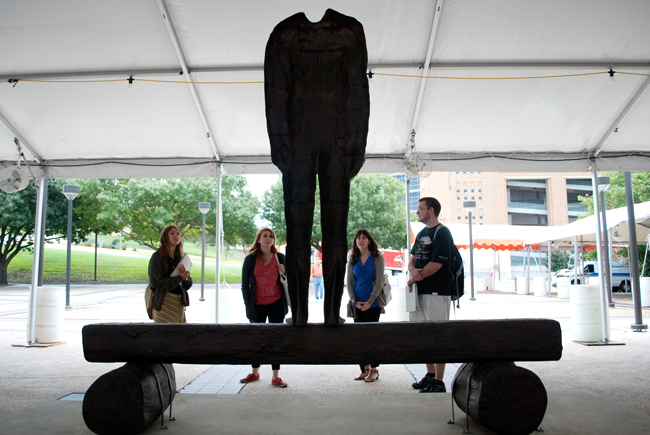 Much of UT’s public art takes on abstract forms, and a tour Tuesday offered insight into the artists and histories of the pieces.

Zack Smith, docent and studio art junior, gave a tour Tuesday, looking closely at four works of art. He began the tour by observing Magdalena Abakanowicz’s sculpture called “Figure on a Trunk,” which stands in front of the Performing Arts Center. The sculpture depicts a headless figure made from iron standing atop a plank of wood.

“It is almost as if this figure is guarding the entrance of the theater,” Smith said.

According to Landmarks, UT’s public art program, it has 31 art pieces on the main campus. The first 28 pieces UT acquired were loaned from the Metropolitan Museum of Art in New York City, and UT is continuing to build its collection, according to the website. Landmark Docents, a group of volunteers who recieved training on the art collection, lead tours which are available to the UT community and campus visitors. Tour leaders give background information on the artists and explain the artwork in detail.

Smith said he became a docent to reach out to the public and stimulate interest in the artwork displayed around the UT campus. He said he is especially drawn to the “Clock Knot,” located off of Dean Keeton Street in front of the Chemical and Petroleum Engineering Building.

“I hear people hang tire swings and hammocks from it,” Smith said.

The tour proceeded to look at a square marble statue adorned with two spheres by Louise Bourgeois called “Eyes,” located inside of the Performing Arts Center. The next stop was a piece of art in front of the Texas Memorial Museum called “Amaryllis” by Tony Smith. The artist constructed a model of the statue out of cardboard while in the hospital and then sent it to a fabricator who transformed the form into steel. Finally, visitors viewed a video clip of a snail climbing over a razor in the Visual Arts Center.

In addition to tours led by docents, viewers can take their own journey throughout campus on self-guided tours as well as audio tours. Landmarks offers dowloadable guides on its website that adults can use to educate children of all ages about various pieces around campus.

Landmarks education coordinator Taylor Browning said she began working with Landmarks because it opens up to both the UT community and the local Austin population.

“As an educator I am really interested in interdisciplinary connections,” Browning said. “I think using art as a medium to do that has a lot of potential.”

Art history senior Miranda Massie is training to become a docent. She said she enjoyed the way people discussed the art during the tour.

“It’s nice to get a blank-slate perspective from somebody who might interpret art from a different angle than you,” she said.