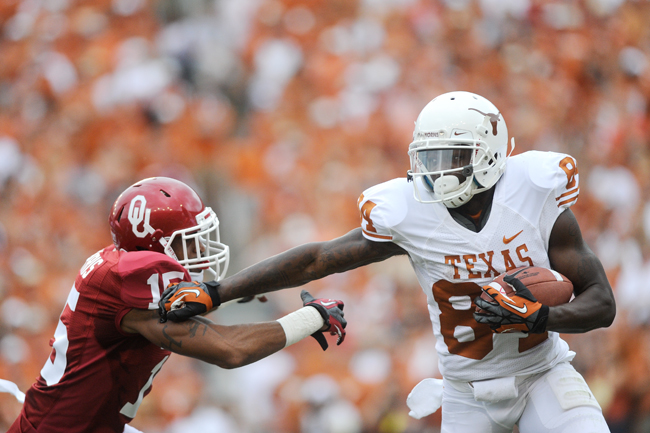 Wide receiver Marquise Goodwin and the rest of the offense are hoping to bounce back after struggling against Oklahoma.

The offense will look to bounce back Saturday against Baylor after its dismal play against Oklahomalast weekend. The Bears sit at the bottom of the Big 12 in both scoring defense and total defense. Longhorn wide receiver Marquise Goodwin is motivated by the fact that other teams have been able to score on them. But he knows that things can easily change from week to week.

“You really can’t look at how other teams played a certain defense, because they’re definitely going to play you a different way,” Goodwin said. “In the past I can say that we looked at them and were like, ‘Maybe we can score a few points and get a few yards.’ But at the end of the day, they come and play Texas even harder than they play anybody else.”

Tackling remains a problem
Each week the coaches and players emphasize that the tackling issues that have been plaguing the Longhorns can be fixed. But Texas has now hit the halfway point of the season, and missed tackles are allowing opponents to gain huge yardage.
The most telling image of the issue was Sooner Damien Williams’ 95-yard touchdown run. Three players surrounded him at the Texas 25-yard line. Due to sloppy tackling, he broke through and made the score, 13-2.
“We’re still giving up way too much space and room, and linebackers and the deep safeties are not tackling like they need to when we get the ball out in the field,” head coach Mack Brown said.

Ash will play Saturday
When quarterback David Ash went down in the fourth quarter against Oklahoma Saturday, it seemed as though everything was going wrong. Luckily for the Longhorns, he said he will be ready to play Saturday against Baylor.
He spoke to reporters Monday with his left wrist wrapped. He practiced Sunday and said he is completely prepared.
“It’s really not any big deal,” Ash said. “I can handle the ball fine. I’ve regained almost full flexibility. I have all the range of motion I need as far as handling the football.”

Rush offense struggles
The Sooners had more than four times the number of rushing yards than the Longhorns accumulated. While the running back corps has been what the offense heavily relied on, the team struggled to generate yards on the ground.
“We have to average four yards per carry, and we averaged 3.2,” Brown said. “One of the reasons we changed to that type of offense was this game, and it sure didn’t work. We didn’t run it very much, and when we did we ran it poorly.”

Printed on Wednesday, October 17, 2012 as: Offense looking ahead to Baylor after OU blowout