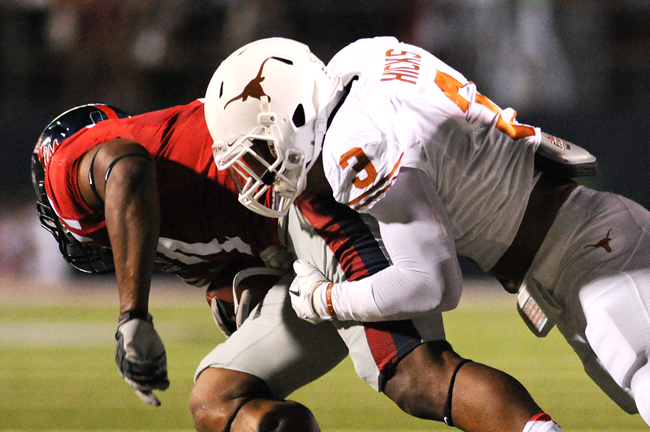 Junior linebacker Jordan Hicks plays a crucial role on the defense, both as a player and a leader.  Before he was injured during Texas’ game against Ole Miss, he led the Longhorns with 15 tackles.

It’s been three games since Jordan Hicks hobbled off of the field with a hip injury against Ole Miss. In the three subsequent contests, Texas has allowed 147 points.

In the three games prior, including the Ole Miss game, the Longhorns gave up 48.

See a connection there?

“Everybody just needs to understand how important Jordan Hicks is and how much his return is going to help us,” Vaccaro said. “He’s a leader, and he holds that linebacker corps together.

He’s the oldest guy in the room. He’s smart, and he’s just a great football player.”

Those qualities made Hicks the team’s most effective tackler before his injury through the first three games, when he led the Longhorns with 15 tackles.

He was all over the field for Texas. Hicks plugged up holes in the middle of the defense and had the speed to keep up with running backs and tight ends in the passing game.

Ever since he exited with his hip injury, however, the Longhorns’ defense has struggled. It has been gashed in the run game for 270 yards a contest, and Texas is now 118th nationally in opponent’s long rushing plays of more than 10 yards. Actually, the Longhorns have allowed 17 rushes of more than 30 yards a carry this season.

But perhaps the most telling statistic for Hicks’ impact is this: In the three games Hicks played, the Longhorn defense allowed 3.9 yards a carry, and over the last three Texas has been shredded for 6.1 yards an attempt.

That means Hicks’ presence on the field is good for more than two yards a rushing attempt. A staggering number, even when you take into account Texas’ level of competition has increased since it entered conference play.

“He’s a guy that it’s not one position that is affected when he’s not game. It’s four or five positions because of his ability to do the things before the play,” defensive coordinator Manny Diaz said. “And you don’t want to get beat before the play begins, and sometimes it can be six inches in your alignment that can really hurt you or hinder you in doing your job.”

It doesn’t help Texas that the players replacing Hicks had little to no collegiate experience heading into the year. The man — actually, more like kid — that has stepped directly into Hicks’ role is 18-year-old Dalton Santos. He’s a talented and imposing presence at 6 feet 3 inches and 250 pounds, but he’s still a freshman nonetheless.

And his lack of experience has shown.

Santos is not capable of making the calls and adjustments Hicks was able to before the snap, and even when the game starts flowing, Santos has been a step behind. He’s aggressive at the line, but at times Santos moves a few inches out of his lane, and it results in a big run or a missed tackle.

However, it’s not just Santos who’s experiencing issues. The pair that started beside Hicks at the beginning of the season, Demarco Cobbs and Steve Edmond, have also been caught flat-footed.

Both are first-year starters, and each has had his ups and downs this season. Their play is steadily improving, but they’ve been out of position in run and pass coverage frequently enough that it has cost Texas.

“Our youth and inexperience is showing up,” Diaz said. “We’re playing in difficult environments, difficult learning environments. Nobody has any sympathy for our plight … Nobody is going to wait for us to grow up. We have to do it in a hurry.”

There is still no guarantee Hicks will return this week — the medical staff listed him as doubtful for last week’s game — but for the Texas defense, he can’t hit the field soon enough.
“He’s one of the best leaders we have on defense, and he’s certainly the leader in the linebacker room,” Diaz said.