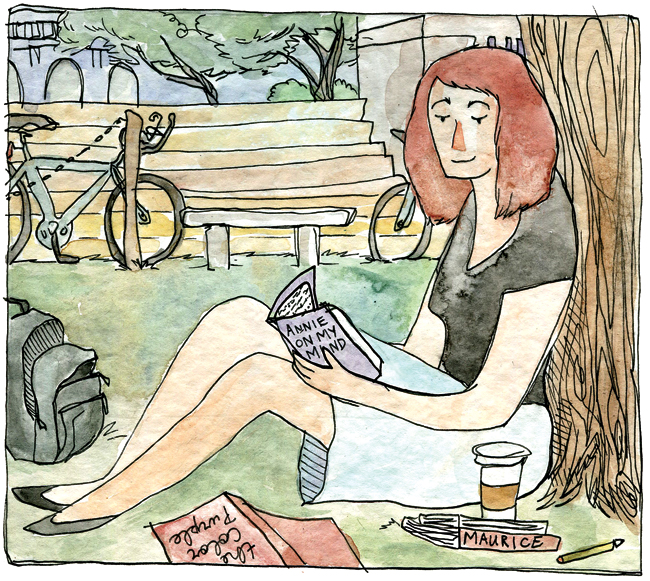 The Daily Texan compiled a short list of books with LGBTQ themes for this year's "Spirit Day."

Allies and members of the LGBTQ community will don purple Friday as part of a movement against bullying of lesbian, gay, bisexual and transgender youth.

The Gay & Lesbian Alliance Against Defamation organization, or GLAAD, declared Oct. 19 “Spirit Day” several years ago. On Spirit Day, allies and LGBTQ people alike are encouraged to wear an article of purple clothing. But for the bookworms who want to do more than wear purple, The Daily Texan has compiled a short list of books with LGBTQ themes you should be reading. Note that this list does not aim to list “the best” but instead offers a sample of the literature.

“Maurice” by E.M. Forster (1971) Literature
Although it was written in 1913 and revisited and edited several times after, Forster’s book was published posthumously. The novel was ahead of its time, both when it was written and when it was published, and deals with the now standard theme of self-acceptance of one’s sexuality. Forster called his main character, Maurice Hall, a snob, who Forster says is saved by his homosexuality. Considering the novel’s Victorian-age setting, it is both odd and heartwarming to see a happy ending.

“The Color Purple” by Alice Walker (1982) Literature
Told through a series of letters, “The Color Purple” tells the story of a black woman in the South during the late 1930s. Celie, the book’s main character, starts at the bottom of the social ladder, and the book primarily deals with class fixtures as she climbs up. Celie goes through life being abused, beaten and often raped, but eventually she overcomes her pain and struggles. Celie has an on-and-off relationship with a woman named Shug, who also serves as Celie’s main mentor as she develops.

“Boy Meets Boy” by David Levithan (2003) Young Adult
Levithan’s story is set in a town where homophobia does not exist. “Boy Meets Boy” is a gay love story where being gay is not the central theme to the plot, which differs from most LGBTQ novels that deal almost entirely with themes of acceptance. Instead, Levithan crafts a charming love story with beautiful prose. Simple, straightforward and easy to read.

“I Am Not Myself These Days” by Josh Kilmer-Purcell (2006) Memoir
Part tragedy and part comedy, Kilmer-Purcell’s memoir weaves the story of his earlier days and nights in New York, where he lived a double life. By day he was an advertising art director, and by night he was “Aqua,” a drag queen who frequented gay bars and clubs and was seeing a crack-addicted male escort. Klimer-Purcell manages to tell the often tragic story of his time in the ‘90s with a humorous tone and lighthearted voice.

“Giovanni’s Room” by James Baldwin (1956) Literature
Set in Paris, Baldwin’s novel is about the love affair between his protagonist, David, and a bartender named Giovanni. “Giovanni’s Room” deals with acceptance and denial, as the character David tries to convince himself to be straight by forcing himself to have sex with women. Realistic for its time and setting, this novel does not have a happy ending, but it is a must-read and recommended by today’s top LGBTQ authors, like John Waters.

“Stone Butch Blues” by Leslie Feinberg (1993) Literature
“Stone Butch Blues” chronicles Jess Goldberg’s life as she struggles with both her sexuality, gender identity and gender role during the late ‘60s and early ‘70s. The book tells the transgender experience, and Feinberg does a masterful job presenting the complicated historical time revolving around the Stonewall riot by telling it through human eyes. Regarded as a groundbreaking story of fiction for gender identity and transgenderism, Feinberg’s story started as a hit in the underground community before making it big in mainstream literature.

“Annie on My Mind” by Nancy Garden (1982) Young Adult
Garden’s novel tells the teenage love story between Annie Kenyon and Liza Winthrop. The two start out as friends, but their relationship quickly grows until they have their first kiss. It is not until this point that Liza starts thinking about her sexuality, and from this point on Liza struggles to accept her own sexuality. Narrated by the confused, conflicted and often lost Liza, the book is a consolation to anyone going through something similar. While this is almost a cliche plot by today’s standards, it was revolutionary to young adult fiction at the time. The book was banned by multiple schools and even burned.

“Me Talk Pretty One Day” by David Sedaris (2000) Memoir
In his fourth collection of essays and thoughts, Sedaris divides his book into two parts. Part one deals with his upbringing and time in New York, and part two addresses his time spent with his partner in Paris. Sedaris did not speak French when he first moved to Paris, so most of his experiences have a whismical humor to them.

“Sister Arts: The Erotics of Lesbian Landscapes” by Lisa Moore (2011) Nonfiction
Moore, a UT professor in the College of Liberal Arts, traces the history of lesbian art in visual arts, poetry and gardening. The book focuses on four 18th-century women: Mary Delany, Anna Seward, Honora Sneyd and Sarah Pierce. Through lush narratives, Moore uncovers how all of them used their art forms to express love for other women.